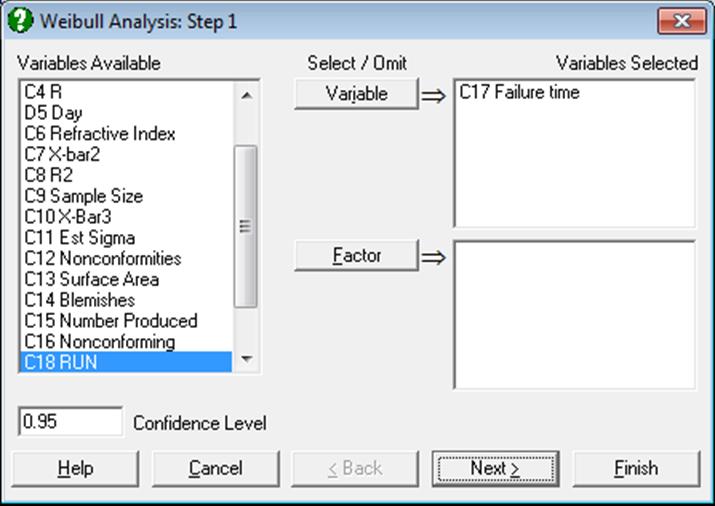 It is sufficient to select one data column to run a Weibull Analysis. Multisample data can be selected either in the form of multiple columns (not necessarily of equal length) or data columns classified by one or more factor columns (see 6.0.4. Multisample Tests). If at least one factor column is selected, then a further dialogue will pop up asking for the combination of factor levels to be included.

An Intermediate Inputs dialogue enables you to control the following parameters:

Model: This can be one of two-parameter maximum likelihood or two- or three-parameter OLS regressions.

Method: If the method is OLS, then you can choose to regress Y on X (the default) or X on Y.

Population size: If the population size is known, you can enter it here. This is the number N used in generating the median ranks as described below. If this box is left as 0, then the program assumes that N is equal to the number of cases in the sample n. 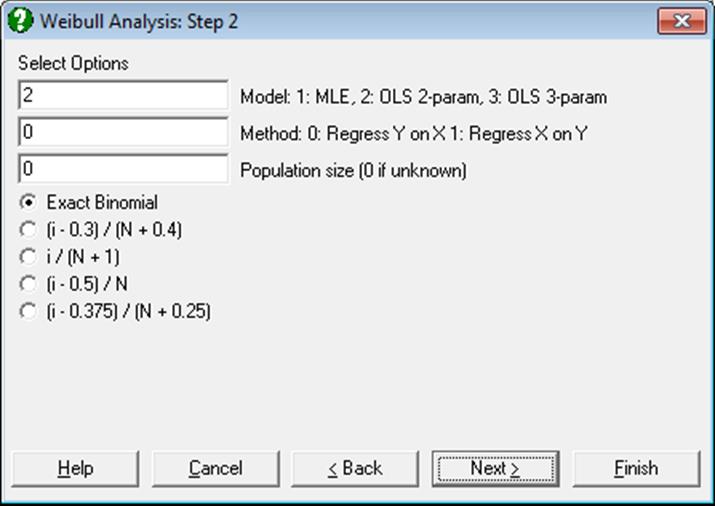 Median Ranks: In order to run a regression and to plot a chart, Weibull Analysis needs to generate median ranks as Y-axis values. Median ranks can be computed in one of the following ways.

where N is the population size supplied by the user as described above. If N is not known, it is assumed to be equal to the sample size n. The default method adopted by UNISTAT is Exact Binomial, where the exact median ranks are determined from the binomial distribution as:

where Ri is the median rank of the ith observation. Other options in this list are various approximations to median ranks. For large values of N not all exact median ranks can be computed. When this is the case, the program cannot proceed with the analysis. However, you can still run your model by selecting one of the approximation formulas. 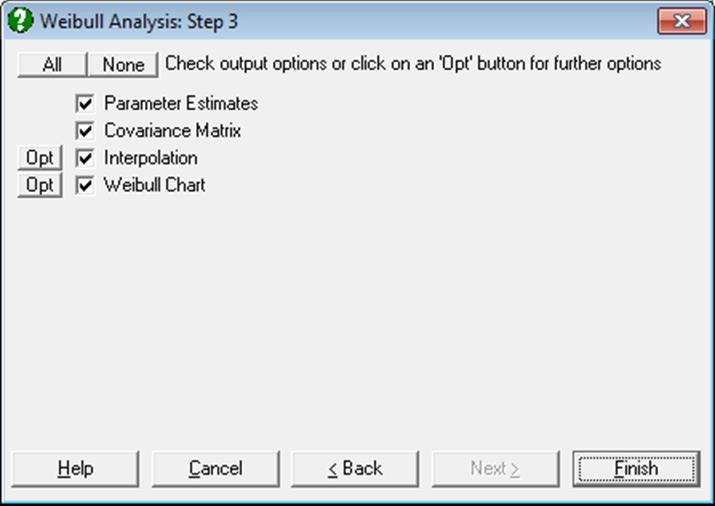 Parameters of the Weibull distribution can be estimated by one of the following three methods.

Two-parameter maximum likelihood estimation: The probability density function for the two-parameter Weibull distribution is given as:

where n is the sample size. Differentiating L with respect to β and η and setting equal to zero, we obtain the following two equations used in estimation:

where T is the failure time, β is the shape parameter, η is the scale parameter. Taking the natural logarithm of both sides and rearranging we obtain:

This is clearly a line equation of the form:

where, conveniently, the left hand side is the gompit (or cloglog) function:

and F(T) is the median rank function, with the slope:

where β is the shape parameter, η is the scale parameter, and γ is the location parameter. This equation is linearised as above and all three parameters are estimated simultaneously using the iterative least squares method.

Mean failure time: This is found using the gamma function:

For all estimation methods, the variance-covariance matrix is defined as the inverse of the second partial derivatives matrix of the log likelihood function:

In the Output Options Dialogue, clicking on the [Opt] button situated to the left of the Interpolation check box, the interpolation dialogue can be accessed. 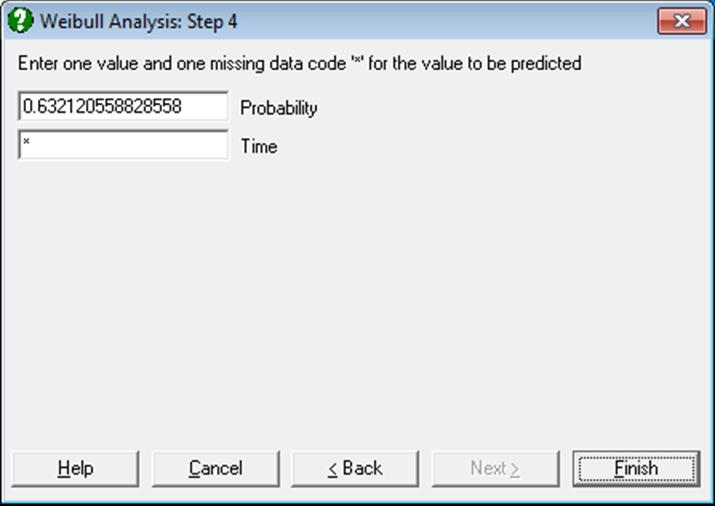 If you use UNISTAT’s X-Y Plots procedure and set the Y-axis scale as gompit and the X-axis scale as logarithmic, you instantly have a Weibull probability paper. If you select median ranks as the Y-axis and failure times as the X-axis variable and fit a trend line, you would have already estimated the two-parameter Weibull model. This is precisely the way we generate the Weibull chart here.

If the data lies on a near-straight line, then it is said to conform to the Weibull distribution. 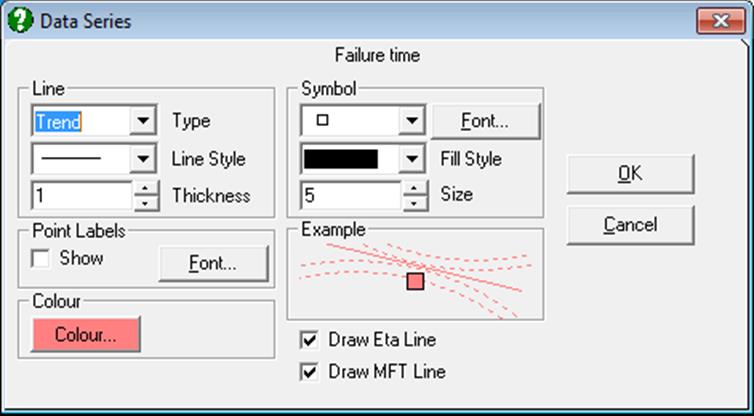 Clicking the [Opt] button situated to the left of the Weibull Chart option will place the graph in UNISTAT’s Graphics Editor. In the Edit → Data Series dialogue, two check boxes allow you to show or hide the eta and mean failure time lines on the chart.

Open TIMESER and select Statistics 2 → Quality Control → Weibull Analysis. From the Variable Selection Dialogue select Failure time (C17) as [Variable]. In the next dialogue, enter 100 for the population size and select (i – 0.5) / N for median rank approximation. The following output is obtained: 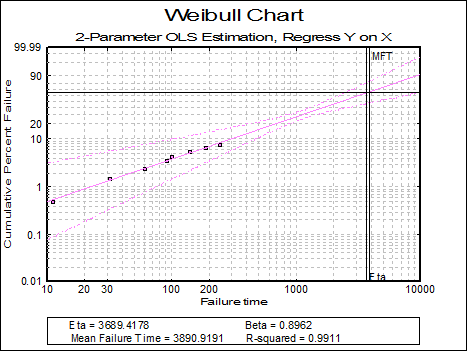 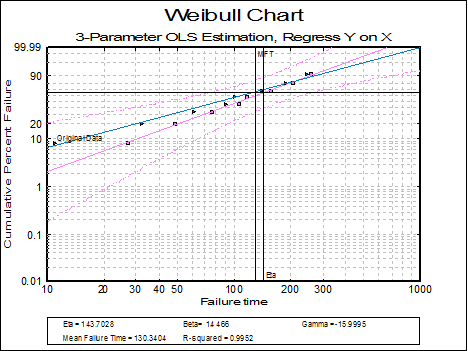