If data is given in the form of a table where measurements corresponding to different parts are in separate columns, it must be transformed into a more convenient format for analysis.

We need to stack all measurements in a single column and create three categorical data columns (or factors) to keep track of which measurement belongs to which operator, which trial and which part. For a fully specified table we need to end up with four columns in the worksheet, one data and three factor columns, though the last factor column Trial is not used in Gauge R&R Analysis. 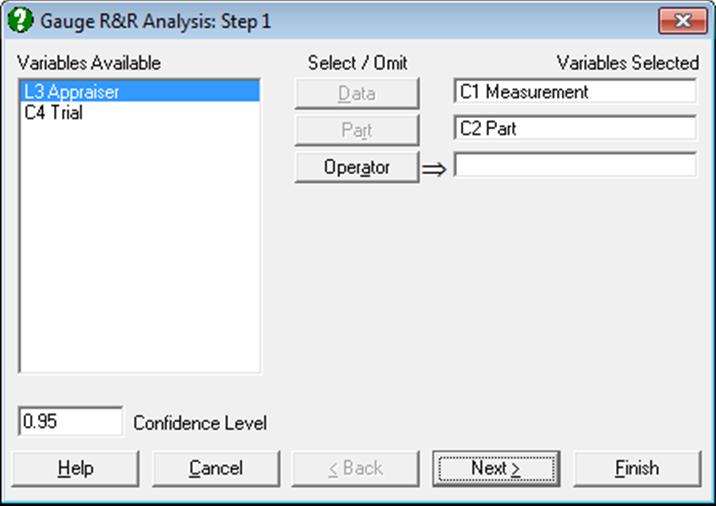 In the Variable Selection Dialogue, the column containing all measurements is selected as [Data] and the factor column containing part numbers is selected as [Part]. These are the two compulsory variables without which an analysis is not possible. If there are two or more operators taking measurements, this information should be provided in the factor column [Operator].

In step 2 you can define parameters for the analysis and its charts. 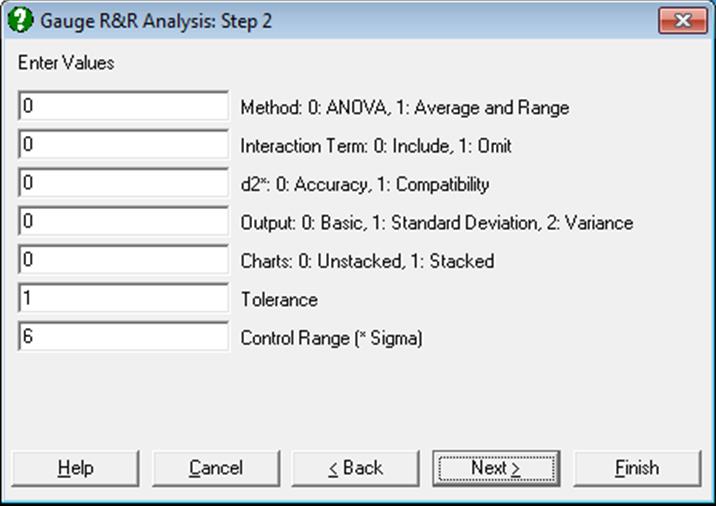 Charts: Range Chart (R Chart) and Average Chart (X Bar Chart) can be displayed. By default (Unstacked), trials by different operators are represented separately along the X-axis. When the Stacked option is selected, each operator’s data is plotted for the same trial value on the X-axis.

Tolerance: When this value is other than the default value of unity, a % tolerance column is added to the output. % tolerance values are obtained by dividing the study variation by the supplied tolerance value (times 100).

Control Range: The observed process variation in terms of sample standard deviation. This is usually 6, ± 3 sigma around the centre. If the sample is from a normally distributed population, then approximately 99.73% of all data points would fall within this range. Other commonly used values are 5.15 for 99% and 4 for 95% coverage respectively. 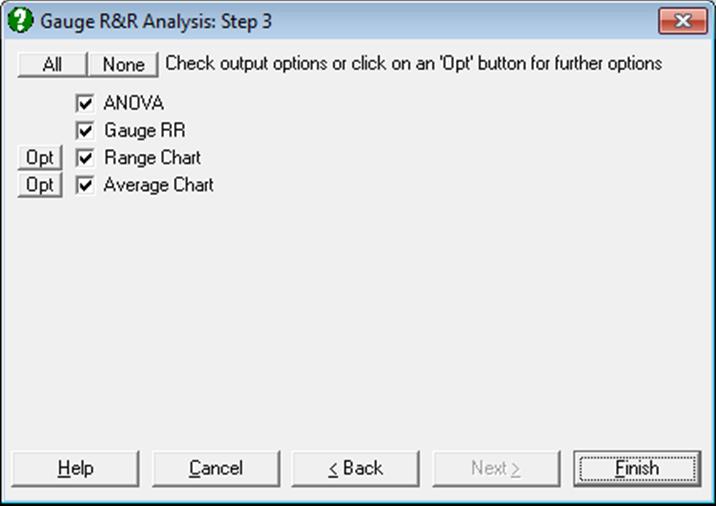 This method is supported for historical reasons, because it is possible to perform calculations by hand, with the help of some published tables. Where possible, the use of ANOVA method should be preferred.

For Average and Range method and charts we need to find the mean range. The difference between maximum and minimum measurements for each trial and each operator are computed:

where t is the number of trials. The mean range is then defined as:

Then the output parameters for Average and Range method is calculated as follows.

The percentage variation is calculated as 100 x Variation / TV and the number of distinct categories as Int(1.41(PV/RR)).

The Mean Square (MS) values from the ANOVA table are used to construct study variation values as follows.

The confidence intervals are computed employing the modified large sample method given in Montgomery, D. C. (2009).

The percentage variation is calculated as 100 x Variation / TV and the number of distinct categories as Int(1.41(PV/RR)).

The two types of charts that can be plotted are Range Chart and Average Chart, which are basically an R Chart and an X Bar Chart for two factor variables respectively. Range Chart is a graphical representation of repeatability and shows the consistency of the gage variability. Average Chart represents reproducibility (or operator variability) and part variation.

For Range Chart, the difference between maximum and minimum measurements are computed for each trial:

Assuming the Control Range is 6, the control limits are found as:

For Average Chart, the overall mean is calculated as:

And the control limits are:

Data is given in Figure 12 Gage Repeatability and Reproducibility Data Collection Sheet on p. 101 of AIAG (2002). Note that AIAG (2002) reports standard deviations, rather than the variance or study variation.

Open TIMESER and select Statistics 2 → Quality Control → Gauge R&R Analysis. Select Measurement (C22) as [Data], Part (C23) as [Part] and Appraiser (S24) as [Operator]. On Step 2 enter 1 for Method: Average and Range and leave all other parameters unchanged. On the Output Options Dialogue check all options to obtain the following output. 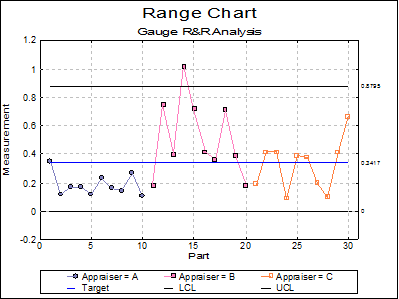 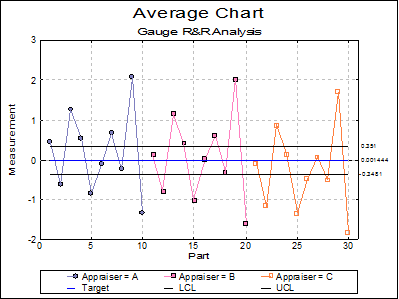 Continuing from the last example, on the Variable Selection Dialogue edit the Confidence Level as 0.9, on the second dialogue enter the following parameters and click [Finish]. 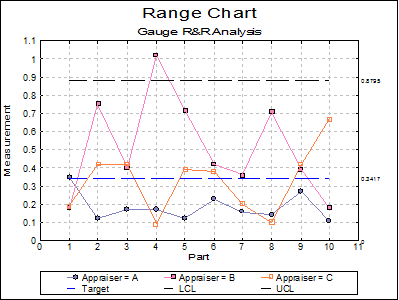 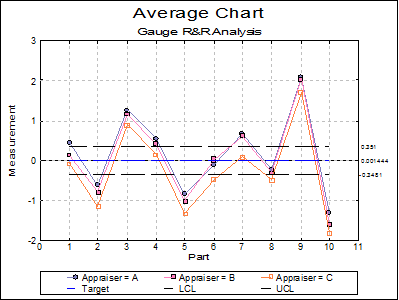