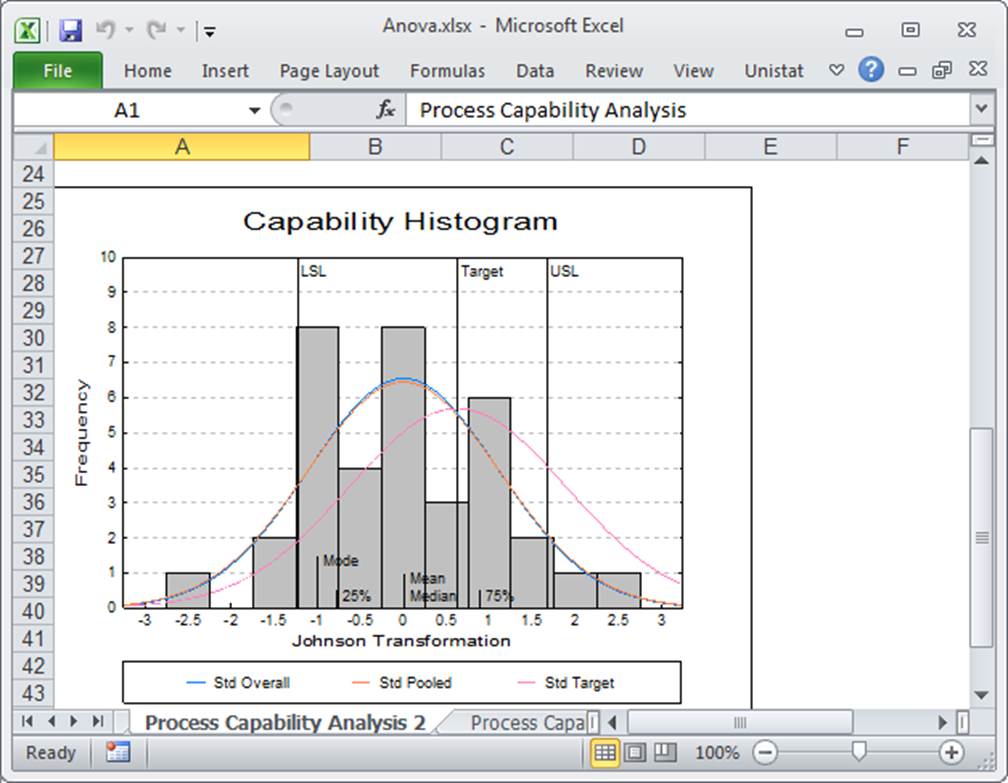 Output is sent to a new worksheet in the active workbook. If Excel is not running already, it is launched first.

Styles: When UNISTAT output is sent to an Excel document for the first time, it creates some Excel styles for its own use. Subsequent pages of output will only refer to these styles and therefore will take less time to complete. Once they are automatically created by UNISTAT, you can edit these styles to your taste and all subsequent UNISTAT output will conform to your choices. The following UNISTAT styles are created:

1.       UNISTAT Main Title: 16 pt, bold, italic, Times New Roman. In addition to the possibility of editing this style from within Excel, you can change the default title font by entering and editing the following line in Documents\Unistat10\Unistat10.ini file under the [Fonts] section:

3.       UNISTAT Normal: 8 pt, Arial. All text output is in this style. To change the default text font enter and edit the following line in Unistat10.ini under the [Fonts] section:

5.       UNISTAT Table Title 5: The column and row titles of tables are defined by this style (Excel only). This style is like UNISTAT Normal, except that it has a coloured background. In addition to the possibility of editing this style from within Excel, you can also enter and edit the following line in Unistat10.ini under the [Options] section, to change the background colour:

Width of Output and Blocking: Unlike other output media, by default, Excel tables are not blocked, i.e. the entire matrix is output as one block. The main advantage of this approach is the possibility of highlighting an entire matrix and using it as input for further analysis. Under other circumstances, however, you may wish to have large matrices blocked as in other output options. To do this, enter the following line in Unistat10.ini under the [Options] section:

where x is the number of columns per block. This may be useful, among other things, for printing large matrices in portrait or landscape orientation, where x = 5 and x = 9 will be the appropriate values respectively.

Worksheet Titles: By default, UNISTAT will name each worksheet it creates with the title of the procedure performed, followed by a sequence number. If you do not like this approach (e.g. if these titles appear too long) you can switch titles off by entering the following line in Unistat10.ini under the [Options] section:

Graphics Object and Font Size: It is possible to make the graphics objects appear smaller or bigger than the default size. The font size can also be increased or decreased for all text on graphs proportionately. See 2.2.1. UNISTAT Output Window for details.