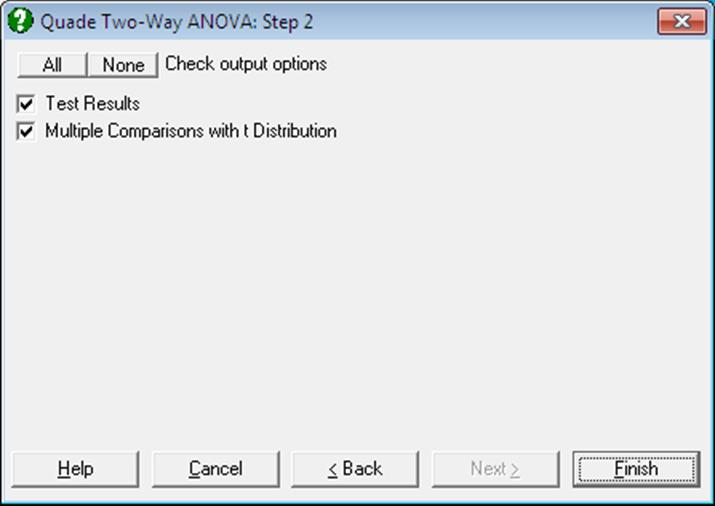 Data entry is in matrix format (see 6.0.5. Tests with Matrix Data). Columns selected for this test must have equal number of rows and rows containing at least one missing value are omitted.

In the analysis of several related variables a more powerful alternative to the Friedman Two-Way ANOVA is Quade Two-Way ANOVA by ranks. First the ranks (Rij, i = 1, …, N, j = 1, …, M) and the range of data in each row are found and range values are also ranked (Qi, i = 1, …, N). The test statistic is:

The test statistic displayed is corrected for ties. The output includes the rank sum and mean rank for each variable and the correction for ties. The one-tail probability is reported using the F-distribution with M – 1 and (N – 1)(M – 1) degrees of freedom.

If the null hypothesis is rejected as result of the Quade’s test, then a multiple comparison can be run to find out which column effects are different. Nonparametric Multiple Comparisons are performed in a way similar to the Tukey-HSD test using rank sums and the t-distribution. The standard error is:

Since the right tail probability is less than 5%, reject the null hypothesis. Therefore, proceed with the Multiple Comparisons to find out which treatments are different.