Data entry is in multisample format (see 6.0.4. Multisample Tests). Each sample can be entered in a separate column (not necessarily of equal length), or they can be stacked in one or more columns and subsamples defined by an unlimited number of factor columns. Missing values are omitted by case. 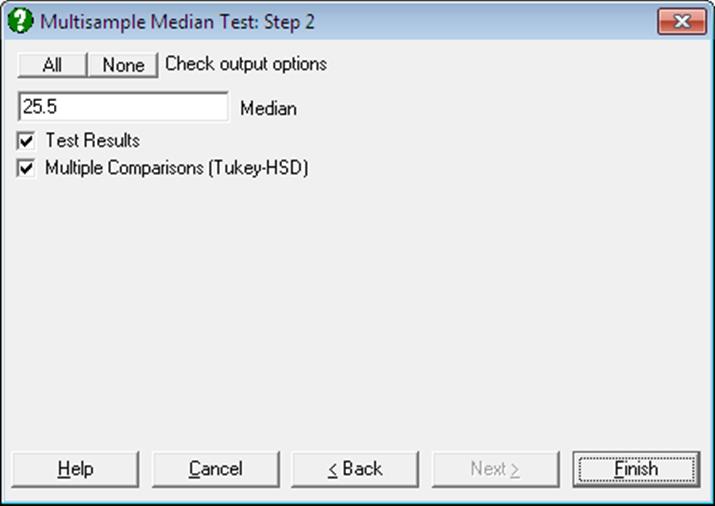 A further dialogue allows you to override the median computed from data and enter any values. The two output options can also be selected from the same dialogue.

Like the Two Sample Median Test, this is also used to determine whether the samples have been drawn from populations with the same median. But here, the number of samples is not limited to two. The number of cases less than or equal to and greater than the overall median is found for each sample. Then the chi-square statistic is calculated from the obtained frequencies.

The one-tail probability is reported using the chi-square distribution with M – 1 degrees of freedom.

A Tukey-HSD type comparison is made between all possible pairs of groups. The value used in comparisons is the number of cases greater than the overall median for each sample (i.e. the first column of the table displayed in test results).

If the total number of cases N is an odd number the standard error is computed as:

If N is an even number, then the standard error is:

where n is the harmonic mean of group sizes.

Open NONPARM1, select Statistics 1 → Nonparametric Tests (Multisample) → Multisample Median Test and include North, East, South and West (C19 to C22) in the analysis by clicking [Variable]. Check the Test Results and the Multiple Comparisons boxes to obtain the following results:

Since the right tail probability is less than 5% the null hypothesis is rejected. In the 5th edition of Biostatistical Analysis (2010), Examples 10.12 on p. 219 and 11.9 on p. 245, Zar employs a different Method where observations at the median are omitted. With this approach the total number of valid cases is 46 and the chi-squared statistic is 11.182.

Next we ask the question which groups are significantly different at 95%.

The overall conclusion is that although elm trees on the East and South definitely have different heights at 95%, nothing can be said about the ones on the North and West.