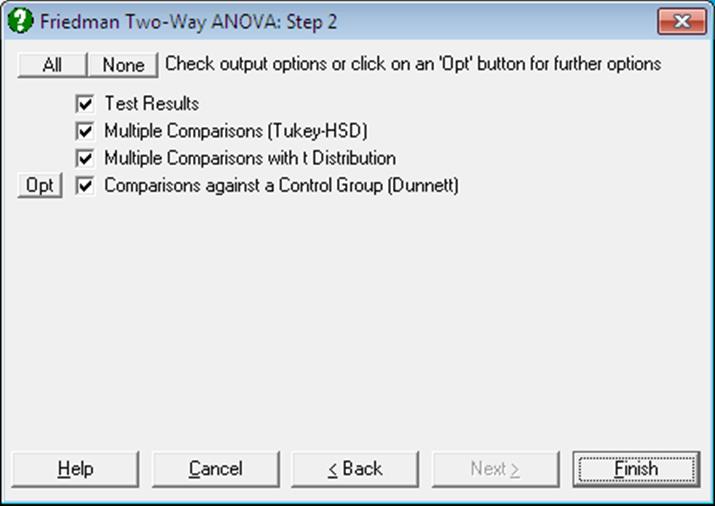 Data entry is in matrix format (see 6.0.5. Tests with Matrix Data). Columns selected for this test must have equal number of rows and rows containing at least one missing value are omitted.

This test is used to determine whether the M samples have been drawn from the same population. Cases are ranked and the mean rank is calculated for each sample. The test statistic is calculated as follows:

The test statistic corrected for ties is:

where K is sum of k3-k and k is the number of tied cases for a particular rank. H’ has a chi-square distribution with M – 1 degrees of freedom.

If the null hypothesis is rejected as result of the Friedman’s test, then a multiple comparison can be run to find out which column effects are different.

Nonparametric Multiple Comparisons are performed in a way similar to the Tukey-HSD test using rank sums. The standard error is computed as:

Comparisons are made using rank sums and the t-distribution. The standard error is computed as:

Comparisons against a control group (Dunnett)

If each group of data is to be tested against a control group then select this option. The standard error is computed as follows:

Example 10.5 on p. 286 from Armitage & Berry (2002). Clotting times (min) of plasma from eight subjects, treated by four methods are given. The null hypothesis “there is no difference between the four treatments” is tested.

Both tests are significant at the 1% level. Hence reject the null hypothesis.

Example 12.5 on p. 278 from Zar, J. H. (2010). A researcher wants to test the null hypothesis “time for effectiveness is the same for all three anesthetics”, or in other words that all means are the same against the alternative hypothesis that they are not all equal.

Open NONPARM1, select Statistics 1 → Nonparametric Tests (Multisample) → Friedman Two-Way ANOVA and include Treatment A to Treatment C (C40 to C42) in the analysis by clicking [Variable]. Check the Test Results output option only to obtain the following results:

As the right tail probability is less than 5% reject the null hypothesis.

Open NONPARM1, select Statistics 1 → Nonparametric Tests (Multisample) → Friedman Two-Way ANOVA and include Grass 1 to Grass 4 (C31 to C34) in the analysis by clicking [Variable]. Select only the Test Results and Multiple comparisons with t-distribution output options to obtain the following results:

Since the right tail probability is less than 5%, reject the null hypothesis. Therefore, we can proceed with Multiple Comparisons to find out which treatments are different.

The overall conclusion is that Grass 1/2 and Grass 1/3 are different.