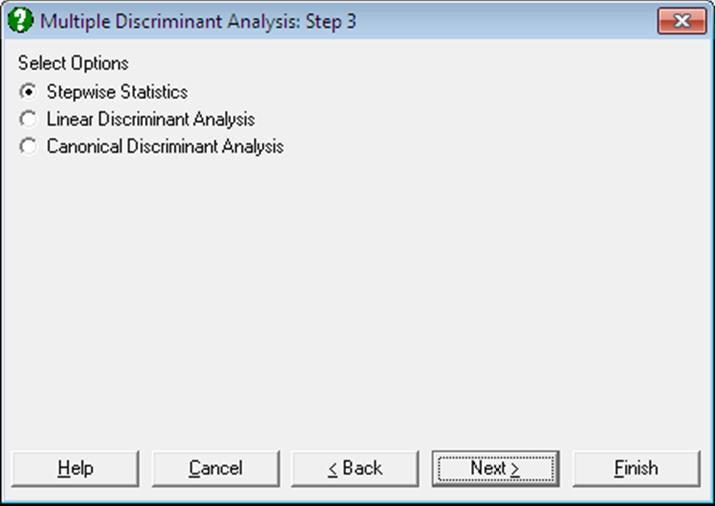 The Stepwise check box provided on the Variable Selection Dialogue enables you to select the best subset of variables to run a Discriminant Analysis. When this box is checked, the variables selected for analysis are ranked according to their influence on the final result. They are also tested against a user-defined criterion of eligibility. The variable with the highest influence that passes the test of eligibility is then included in the analysis. At each step, the already selected variables are also tested against an exclusion criterion and they may be excluded from the analysis if they fail to satisfy this criterion. The steps are repeated until there are no variables that can be entered or removed from the analysis. 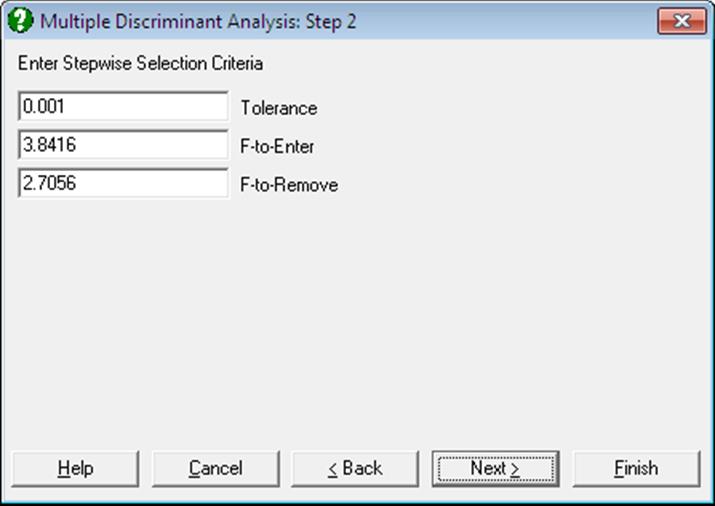 The stepwise selection method used in Stepwise Discriminant Analysis is almost identical to the one employed in Stepwise Regression. For further information on this method and the interpretation of F-to-enter and F-to-remove statistics see 7.2.3.1. Stepwise Selection Criteria. The following output options are available: 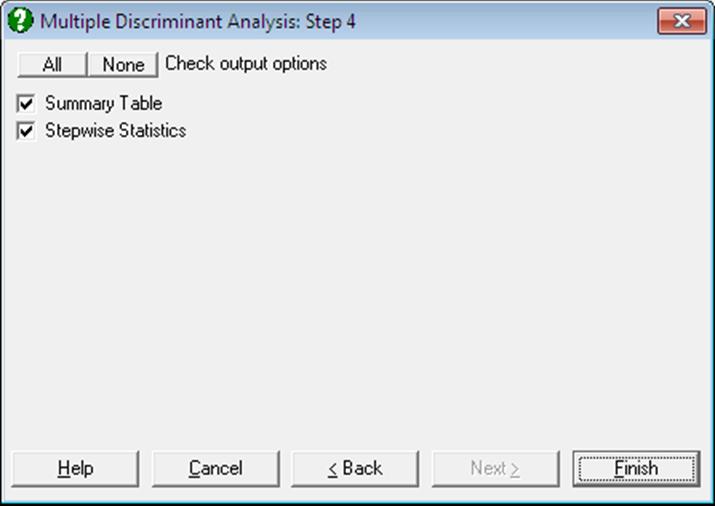 Summary Table: The variable entered or removed at each step, its F-to-enter or F-to-remove value, its tail probability and Wilks’ lambda statistic are displayed.

Stepwise Statistics: First, within group sums of squares and the cross product matrix are computed:

as the new matrix after a new variable is entered or omitted. Then:

if variable i is not in the analysis,

if variable i is in the analysis.

and Wilks’ Lambda is: 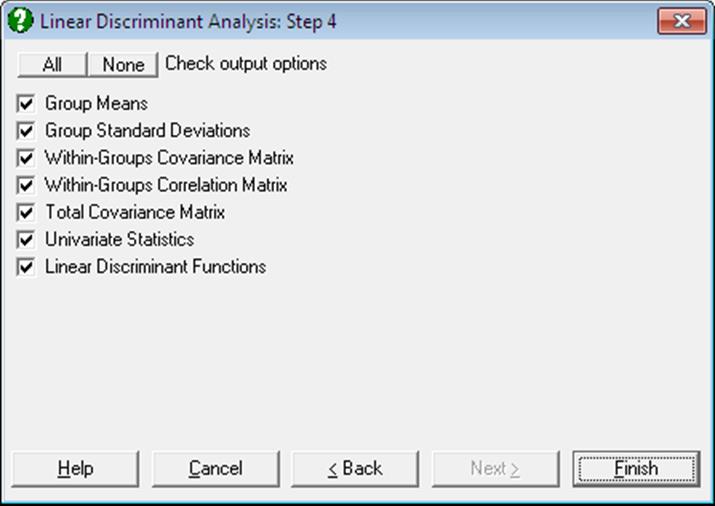 Group Means and Standard Deviations: The means and standard deviations of sub-groups defined by the factor column are tabulated.

Coefficients of the Linear Discriminant Functions are:

The Canonical Discriminant Analysis is based on the eigenvectors and eigenvalues of the proximity matrix and thus it involves an iterational algorithm. Iterations continue until either the reduction in the objective function is less than a given tolerance level, or the maximum number of iterations is reached. 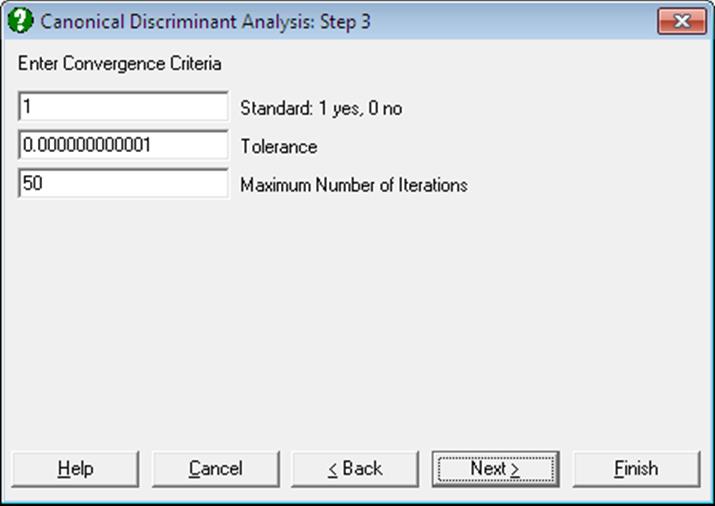 A dialogue allows editing two or three parameters, depending on whether the data is raw or it is already formed into a proximity matrix (i.e. it is square and symmetric). In the former case, the program will allow the choice of forming a standardised (the default) or non standardised proximity matrix. 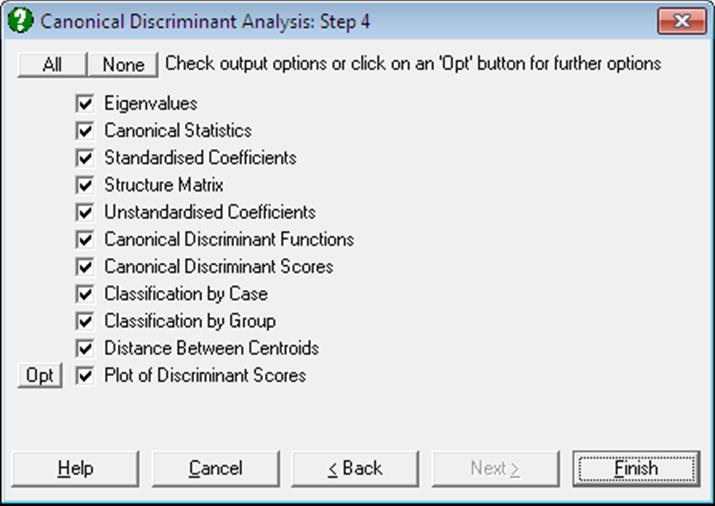 The eigenvalues and eigenvectors of the system are found using the Cholesky decomposition.

Eigenvalues: Canonical Correlations are found as:

Canonical Statistics: Wilks’ lambda is used to test the significance of all the discriminating functions after the first k:

The tail probability for lambda is determined from chi-square distribution:

and the constants are:

Classification by Case: For each case, the chi-square distances from all centroids are computed. The probability of the case being a member of a group is the tail probability for this chi-square value with m degrees of freedom. A case is classified into the group for which this probability is the highest.

The table displays the given group membership, the highest probability (estimated) group, and the probability of the case belonging to the estimated group. If the estimated and actual groups differ, two stars (representing a misclassification) are printed between the two columns.

Classification by Group: This is an alternative way of presenting the classification results explained above. A table is formed with rows and columns corresponding to actual and estimated group memberships respectively. Each cell displays the number of elements and their percentage. Diagonal elements are the cases classified correctly and the off-diagonal elements are misclassified cases.

Distance Between Centroids: The distance between every pair of centroids are tabulated in ascending order.

Plot of Discriminant Scores: This provides options to display group centroids (which are represented by capital letters) and groups selectively. If you select two variables a 2D graph is displayed and a 3D graph if you select three variables. 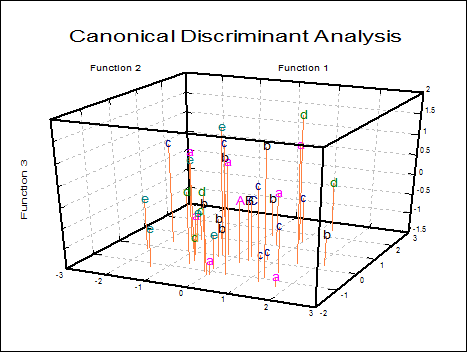 You can choose to display group centroids in capital letters, point labels or change the font of group letters from the Edit → XY Points dialogue. When the Cluster No field is zero all groups will be displayed simultaneously. If this field is set to one, then the first group only, if two, the second group only, etc., will be displayed.

For 2D plots, by checking the Ellipse box on, you can draw interval curves for the mean of Y (confidence) and / or actual Y (prediction) values at one or more confidence levels. For further details see Ellipse Confidence and Prediction Intervals in 4.1.1.1.1. Line.

Table 11.1 on p. 513 from Tabachnick, B. G. & L. S. Fidell (1989). Measurements on four predictors, performance, information, verbal expression and age, are given on three groups of children. In order to keep track of group memberships of children we should add a factor column Group to the data matrix. We would like to find out whether the children have been correctly classified into three groups. We would also like to be able to determine the group membership of a child who was not included in the study, but for whom we have measurements on predictor variables. 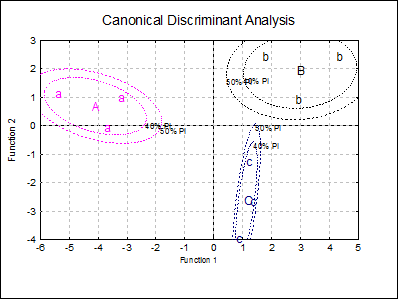 Open STEPDSCR, select Statistics 2 → Discriminant Analysis → Multiple Discriminant Analysis and select Var1, to Var7 (C1 to C7) as [Variable]s, Groups (C8) as [Factor] and check the Stepwise box. On the next dialogue, accept the default values of Tolerance, F-to-Enter and F-to-Remove. Next select Stepwise Statistics and leave both output options checked. The output below is abbreviated: