Predictions (interpolations) and multicollinearity are handled as in other regression options (see, for instance, Logistic Regression). Predicted cases are identified by an asterisk in Classification by Case, Probabilities and Index Values output options (see 7.2.7.3. Multinomial Regression Output Options).

Let J + 1 be the number of distinct categories in the dependent variable and assume that the category 0 is selected as the base category. Then the probabilities given by the multinomial logistic function are:

is the vector of estimated coefficients for the jth category and

is the ith case (row) of the data matrix.

The relative risk ratio for case i relative to the base category is:

The logarithm of the likelihood function is given as:

and the first derivatives as: 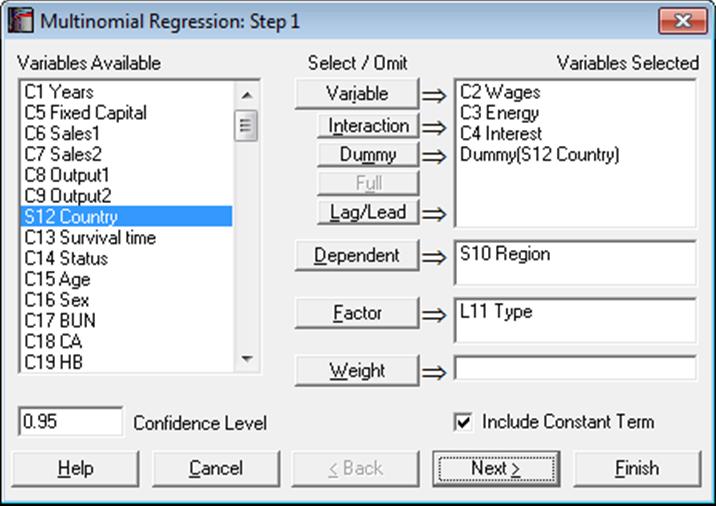 Like Logistic Regression, Multinomial Regression can be used to estimate models with or without a constant term, with or without weights and regressions can be run on a subset of cases as determined by the levels of an unlimited number of factor columns. An unlimited number of dependent variables (numeric or string) can be selected in order to run the same model on different dependent variables. It is also possible to include interaction terms, dummy and lag/lead variables in the model, without having to create them as spreadsheet columns first (see 2.1.4. Creating Interaction, Dummy and Lag/Lead Variables).

A column containing numeric data can be selected as a weights column. Weights are frequency weights and all independent variables are multiplied by this column internally by the program. 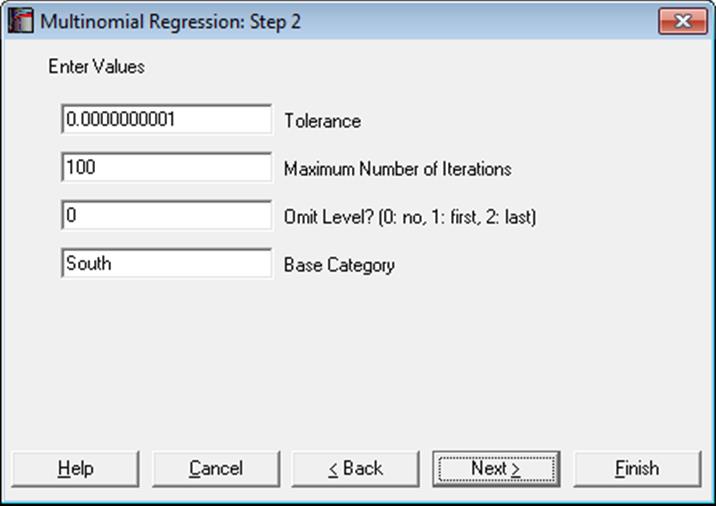 Omit Level: This field will appear only when one or more dummy variables have been included in the model from the Variable Selection Dialogue. Three options are available; (0) do not omit any levels, (1) omit the first level and (2) omit the last level. When no levels are omitted, the model will usually be over-parameterised (see 2.1.4. Creating Interaction, Dummy and Lag/Lead Variables).

Base Category: By default, the most frequent category of the dependent variable is suggested as the base category. To scale the estimated coefficients according to a particular category, enter this category here. The Relative Risk Ratios will be relative to this category.

When the calculations are finished an Output Options Dialogue will provide access to the following options. 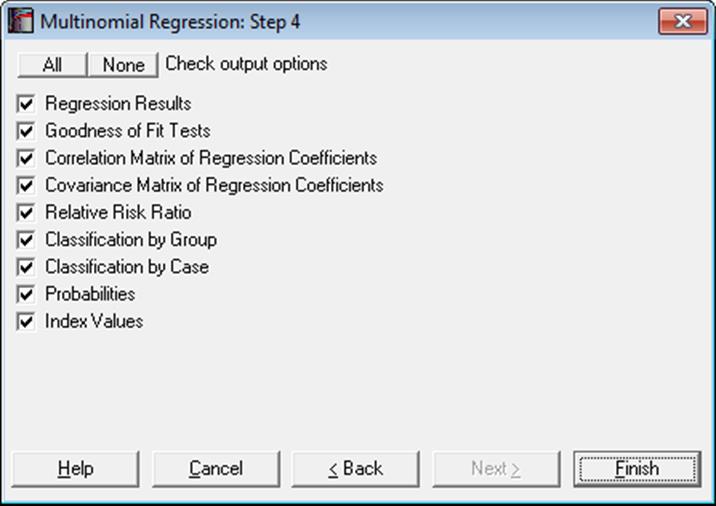 Regression Results: The main regression output displays a table of estimated coefficients for each category of the dependent variable, except for the base category. Standard errors, Wald statistics, probability values and confidence intervals are also displayed for the estimated regression coefficients.

Wald Statistic: This is defined as:

and has a chi-square distribution with one degree of freedom.

Confidence Intervals: The confidence intervals for regression coefficients are computed from:

where k is the number of independent variables in the model and each coefficient’s standard error, σij, is the square root of the diagonal element of covariance matrix.

Values of the relative risk ratio indicate the influence of one unit change in a covariate on the regression.

The standard error of the relative risk ratio is:

which are simply the exponential of the coefficient confidence intervals.

Classification by Case: The observed and estimated group memberships are listed and pairs with disagreement are marked. The estimated group is the one with the highest probability level.

Probabilities: These are calculated as in the first two equations of Multinomial Regression Model Description. The predicted values are marked with two asterisks.

Index Values: These are the fitted values given as:

The predicted values are marked with two asterisks.

Open ANOVA and select Statistics 1 → Regression Analysis → Multinomial Regression. From the Variable Selection Dialogue select Period (C29) as [Dependent], Score (C26) as [Variable] and Noise (S30) as [Dummy]. On Step 2 dialogue enter 1 for Omit Level and leave other entries unchanged. Check all output options to obtain the following output. Some tables have been shortened.