Regressions with logit, probit, gompit (or complementary log log, cloglog) and loglog link functions can be estimated for models with binary dependent variables (dependent variables that consist of two values) as well as aggregated models where data contains a variable on the number of positive (or negative) responses and another variable giving the total number of subjects. All regressions work with similar inputs, employ the same maximum likelihood method and share the same output format, but differ in the link (objective) function used.

1)      Receiver Operating Characteristic (ROC) and Sensitivity and Specificity curves, the area enclosed under the ROC curves (AUC), their confidence intervals and comparisons,

3)      odds ratios and their confidence intervals,

4)      a classification table for the predicted and observed group memberships,

On the other hand, use the Logit / Probit / Gompit procedure if you need;

3)      to estimate the heterogeneity factor (or dispersion parameter),

4)      to estimate the natural response rate or

Logit: The logit function is an odds ratio for a given probability value:

Probit: This is the inverse standard cumulative normal distribution:

Note that various sources interpret gompit, cloglog, loglog, nloglog in different ways. All these models are closely related to each other and one can obtain any of them by using the gompit link function.

For instance, if another source names complementary log log (cloglog) the function we call here gompit, one can switch between the two models by reversing the 0s and 1s in the dependent variable (in binary dependent variable models). This can be done without making any changes in data, by changing the encoding of the dependent variable on the Intermediate Inputs dialogue, by choosing the Max(Y) is encoded as 0 option.

The logarithm of the likelihood function is:

and its first derivative:

ri is the number of responses,

si is the number of subjects,

Fi is the inverse link function and

Gi is the first derivative of Fi.

Fi and Gi are defined for each link function as follows:

1)      Binary (casewise) data where the dependent variable is a binary variable (it consists of two values), and 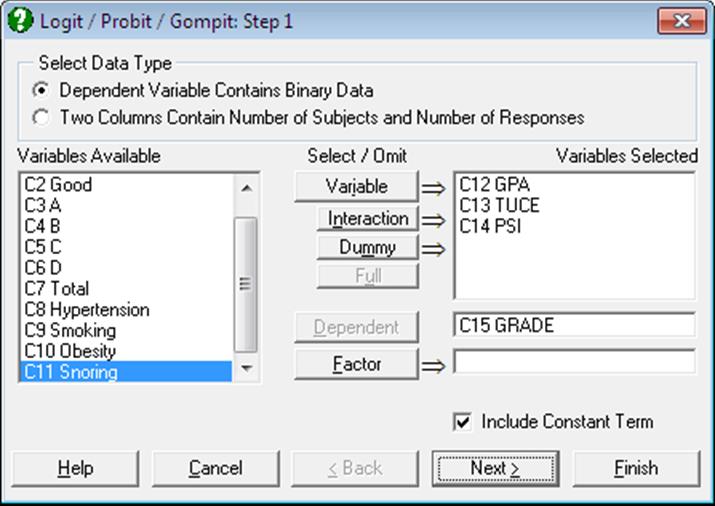 2)      Aggregated (grouped) data, where similar cases are collapsed into groups to generate two columns, one containing the number of responses the other the total number of subjects in the group. 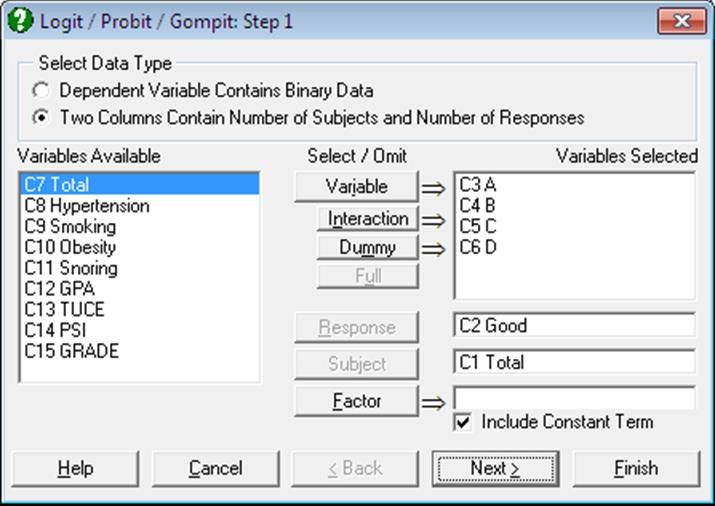 When the first data option is selected, the dependent variable should ideally contain only two distinct values (numeric or string). However, UNISTAT will accept any data column as the dependent variable and then, by default, encode internally those values which are equal to the minimum of this column as 0 and any other values as 1. Alternatively, you can make the program accept the maximum value as 1 and the rest as 0 by changing encoding of the dependent variable on the Intermediate Inputs dialogue by choosing the Max(Y) is encoded as 0 option.

This approach has the advantage and flexibility of running Logit / Probit / Gompit models on columns containing any type of categorical data. For instance, when a logit analysis is run on a column containing years 1995, 1996 and 1997, by default, UNISTAT will internally encode all 1995 entries as 0 and all 1996 and 1997 entries as 1. However, it is left to the user to ensure that the dependent variable selected contains sensible values.

The same data set can be grouped (or collapsed) into the second (aggregated) format as follows:

Cases that do not conform to this (and Subjects = 0) will be considered as missing. As in Linear Regression, it is possible to create interaction terms and dummy variables, but not lag/lead terms (see 2.1.4. Creating Interaction, Dummy and Lag/Lead Variables).

It is also possible to select a factor (categorical) variable (by clicking on [Factor]) in which case the program will perform the analysis on a sub group as defined by the user (see 7.2.1.1. Linear Regression Variable Selection).

Next, an Intermediate Inputs dialogue will pop up. When the dependent variable is binary (and a dummy variable is selected), it will look as follows: 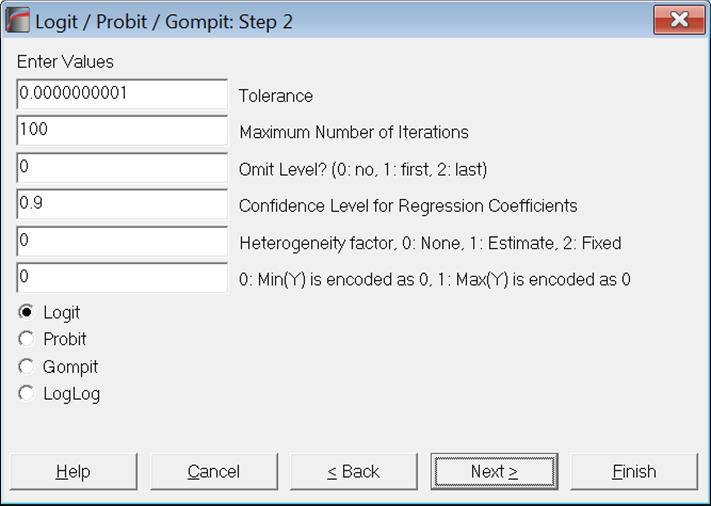 Omit Level: This box will appear only when one or more dummy variables have been included in the model from the Variable Selection Dialogue. Three options are available; (0) do not omit any levels, (1) omit the first level and (2) omit the last level. When no levels are omitted, the model will usually be over-parameterised (see 2.1.4. Creating Interaction, Dummy and Lag/Lead Variables).

However, sometimes this can also be defined as:

Although for a binary dependent variable these two values are the same, they differ for aggregated data option. If you want to estimate the heterogeneity factor by Pearson Chi-square, enter the following line in the [Options] section of Documents\Unistat10\Unistat10.ini file:

Alternatively, you can also enter a given heterogeneity factor here (which is not 0 or 1) and the program will use the given value instead of estimating one.

If the heterogeneity factor is not zero, the covariance matrix will be multiplied by its square root. Therefore, regression coefficients will not be affected by this, but their standard errors will. 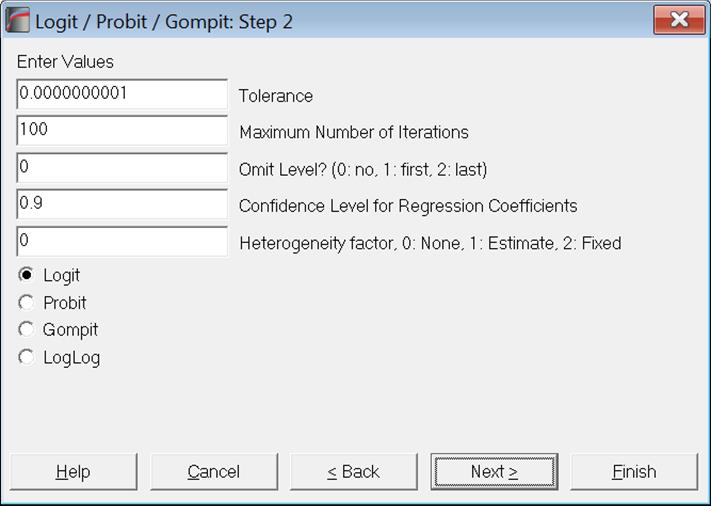 The Link Function: Select the model to be estimated. It can be one of logit, probit, gompit (cloglog) or loglog (see 7.2.5.1. Logit / Probit / Gompit Model Description). 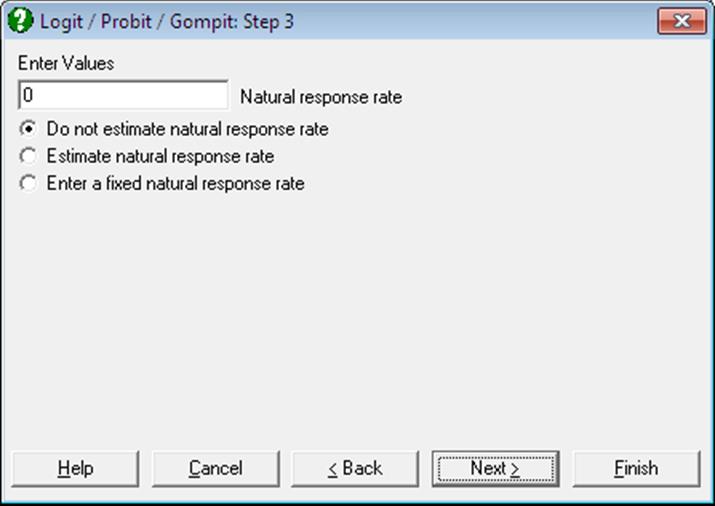 For all models the following common regression output options are displayed.

The Z statistic is defined as:

If the heterogeneity factor is not zero, standard errors are multiplied by its square root. This is reported in the output.

The two-tailed normal probability value is:

The confidence intervals for regression coefficients are computed from:

where each coefficient’s standard error,

, is the square root of the diagonal element of the covariance matrix.

Goodness of Fit Tests: See 7.2.6.4.1. Logistic Regression Results for details. Although for a binary dependent variable log-likelihood for initial and final model values are the same as Null Deviance and Deviance values respectively, they differ for aggregated data option.

Correlation Matrix for Regression Coefficients: Correlations between the estimated coefficients are displayed. If the heterogeneity factor is not zero, correlations are weighted by its square root.

For a model with binary dependent variable, the following output options dialogue pops up. 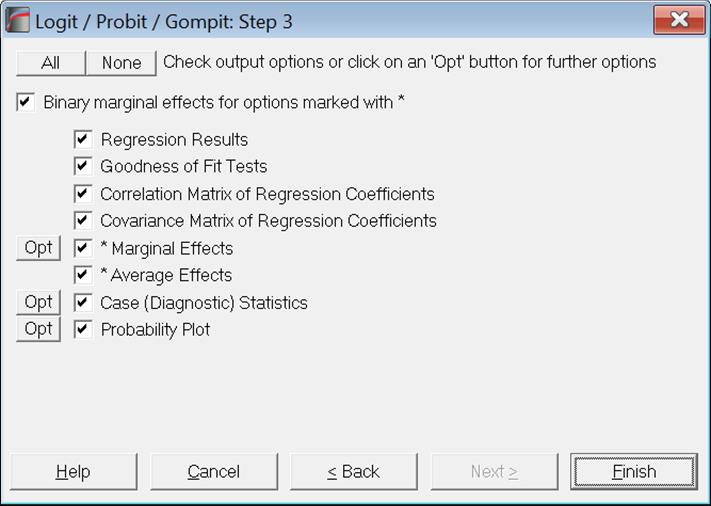 Marginal Effects: This option is available for only binary dependent variable models. Marginal effects measure the change in the estimated probability when a change is made in independent variables. In other words, it is the partial derivative of the prediction function with respect to x:

i.e., the estimated coefficient times its first derivative (slope) at x. You can enter values for the x-vector by clicking the [Opt] button situated to the left Marginal Effects output option. By default, the values displayed are the means of independent variables. 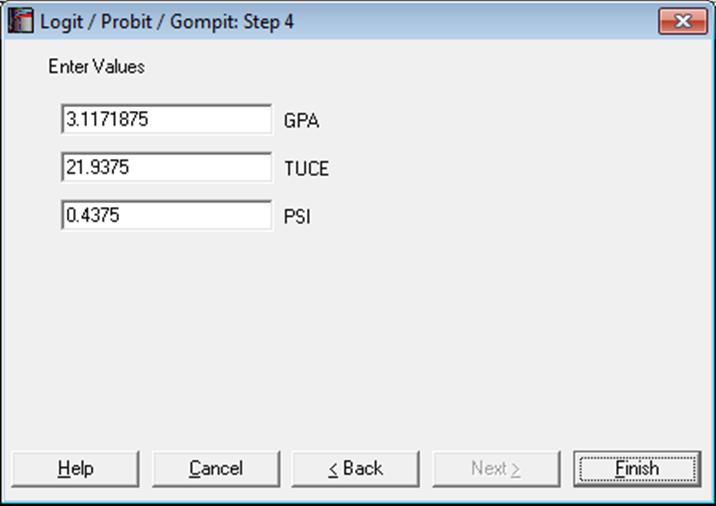 For dummy variables, or in general when an independent variable consists only of 0s and 1s, a slightly different procedure can be used, by checking the box Binary marginal effects for options marked with *. For details see p. 733, Greene (2012).

Average Effects: This option is available for only binary dependent variable models. Average effects are the sample mean of marginal effects computed for each case of the data. 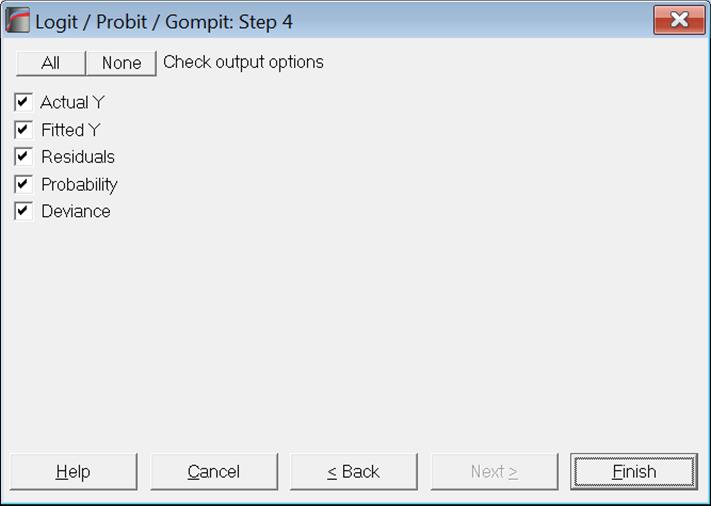 Plot of Estimated Probabilities: The estimated probabilities are plotted against the row numbers, using the appropriate link function for the scaling of the Left-Y axis. 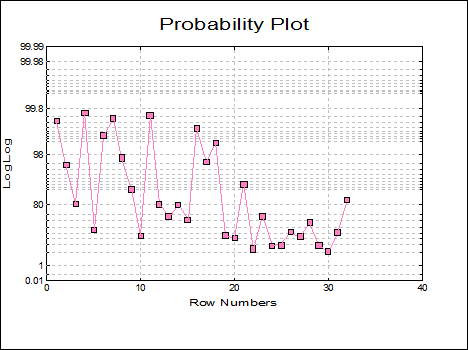 For models with aggregated data (i.e. the number of subjects and responses are given) the marginal and average effects options will not be available. When there are more than one independent variables, the Output Options Dialogue will look like this. 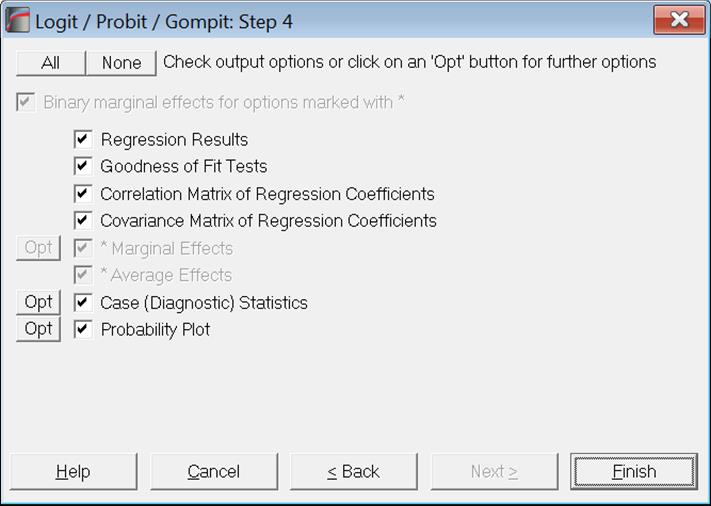 The case statistics table includes the subjects and responses data, as well as expected responses. 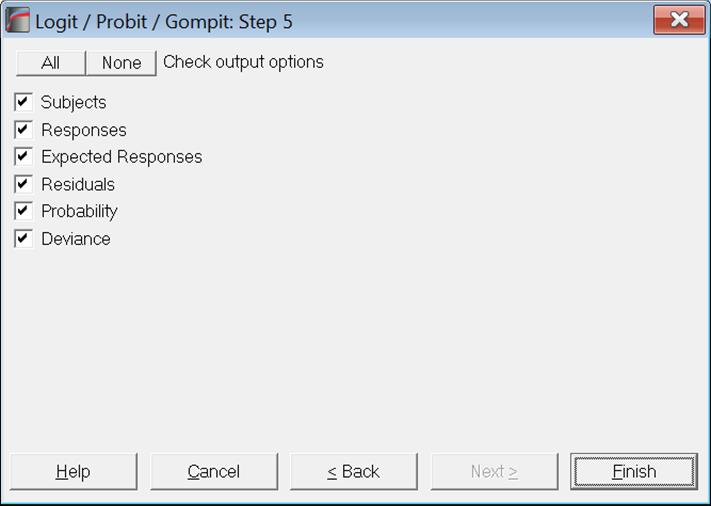 The Probability Plot displays observed and expected probabilities for each case in data. Probability values 0 and 1are considered missing. 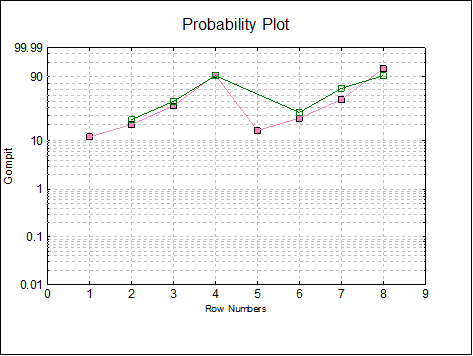 Go back to Variable Selection Dialogue, omit Smoking (C9) from the independent variable list and run the analysis again.

Example 14.1 on p. 490 from Armitage & Berry (2002). Data given in Table 14.1 needs to be transformed into a suitable format where the main effects of the four factors A, B, C and D can be analysed. This is done by creating a new column for each factor such that it contains the value one if the factor occurs in the factor combination column and zero otherwise. The data matrix would then look like this:

Open LOGIT, select Statistics 1 → Regression Analysis → Logit / Probit / Gompit and select the data option Two Columns Contain Number of Subjects and Number of Responses. Then select Total (C1) as [Subject], Good (C2) as [Response] and A, B, C, D (C3 to C6) as [Variable]s. Select all output options for the following results:

Next go back to the Variable Selection Dialogue and check the Probit option. Select only the Regression Results output option.

Example 17.3 on p. 735 Greene (2012). Tables 17.1 and 17.2 display results for three link functions. As these tables contain some misprints, the user is advised to validate the results with the book’s errata website. 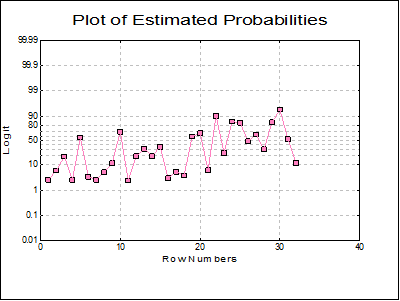