One of the assumptions of the Analysis of Variance is that variances of the subgroups of data (defined by factor levels) are equal. Four tests are provided here to test whether this is the case. The null hypothesis tested is “all population variances are equal”, against the alternative hypothesis “all population variances are not equal”. If the null hypothesis is rejected, then it is possible to perform a number of multiple comparisons to determine which pairs of subgroups have significantly different variances. 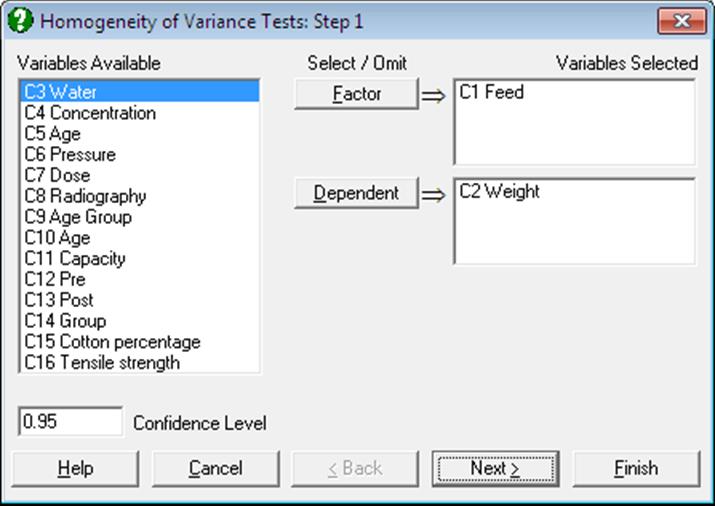 The type of output depends on the number of factors selected. When a single factor variable is selected, a further Output Options Dialogue will allow you to perform multiple comparison tests for variances. If two or more factor variables are selected, then the Output Options Dialogue will not appear and the program will display the test results immediately. 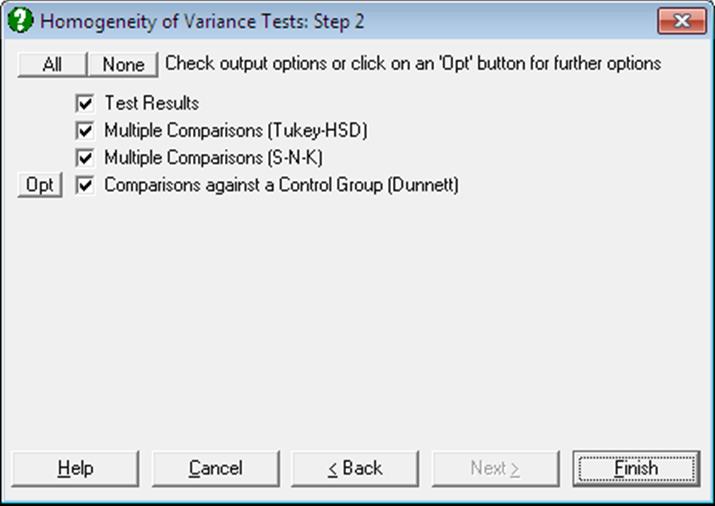 Five alternative test statistics are computed, and by default, all are reported on the same table. If more than one factor column is selected, an overall test is also performed on the subgroups defined by combinations of all levels in all factors. For instance, if two factors are selected, the test is performed on subgroups defined by two-way interactions. If you wish to see exactly which subgroups are tested, you can use the Table of Means procedure first. It is possible to control the statistics displayed in the output by including and editing the following line in the [Options] section of Documents\Unistat10\Unistat10.ini file:

This parameter takes the following values:

0: All five test statistics and the overall test (default)

All subgroups of the dependent variable defined by the selected factor are formed. Groups with a zero variance are omitted and the counts (nj) and variances

of the remaining groups are determined. The test statistic is calculated as follows:

where m is the number of subgroups with non zero variances, n is the total number of cases within these subgroups and:

For a more accurate chi-square distribution the following term is computed:

and the modified test statistic is obtained as:

which is approximately chi-square distributed with m – 1 degrees of freedom.

As Bartlett’s chi-square test does not perform well when the population distributions are not normal, the following modification is widely regarded as a more powerful replacement.

The test statistic B is calculated as in Bartlett’s chi-square test, with the exception in the definition of:

which is F-distributed with m – 1 and R degrees of freedom, where:

An approximate tail probability is computed from the F-distribution:

A lookup table for critical values of Hartley’s F-values (Pearson & Hartley, 1954) is included for a limited range of degrees of freedom, number of subgroups and significance levels. The valid range is as follows:

·     all subgroups have equal number of observations

The computed F-value is compared with the table value at 0.05 and 0.01 levels and the result is reported as:

This test has the advantage of being less sensitive to deviations from normality and is widely accepted as the most powerful homogeneity of variance test. The test statistic, which has an F distribution with (n – k) and (k – 1) degrees of freedom, is computed as follows:

This option is available only when a single factor variable is selected from the Variables Available list. If this is the case, a further dialogue will allow you to perform Tukey-HSD, Student-Newman-Keuls and Dunnett multiple comparison tests for variances.

For each test the q statistic is calculated as:

All possible pairs are compared. Therefore, m(m – 1)/2 comparisons are made. The standard error is calculated as:

This test is identical to Tukey-HSD test except for the way the tabulated q values are computed.

The table format given in the book can be transformed into the factor format by using UNISTAT’s Data → Stack Columns procedure and the Level() function (see 3.4.2.5. Statistical Functions). All data should be stacked in a single column Weight and a factor column Feed created to keep track of the group memberships.

According to Bartlett’s chi-square test the tail probability is far greater than 5% and therefore the null hypothesis is not rejected. The probability value for Hartley’s F is not reported here, as this example does not fulfil the strict criteria outlined above.

Running the above example after entering the HomoVariance=5 line in the [Options] section of Documents\Unistat10\Unistat10.ini file and selecting the Test Results and Comparisons against a Control Group (Dunnett) options only, the following output is obtained.

Comparisons against a Control Group (Dunnett)