One sample and two sample Kolmogorov-Smirnov Tests can be accesses under one menu item and the results are presented in a single page of output.

If you wish to perform a one sample Kolmogorov-Smirnov test, you can select only one variable. If you select two or more variables, then two separate one sample tests will be performed on each variable, alongside a two sample test between them. Output Options Dialogue will allow you to choose which tests to appear in the output.

When the Report summary statistics box is checked, summary information about the selected variables (number of valid and missing cases, mean and standard deviation) is also displayed. 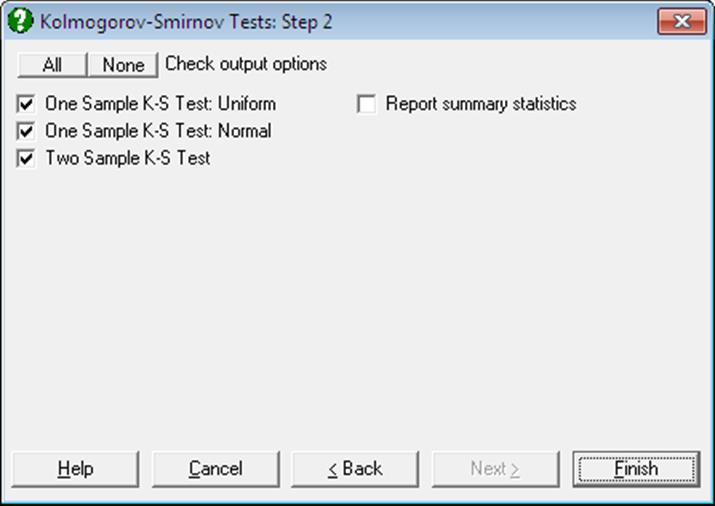 The null hypothesis “the cumulative distribution of the observed set of data is uniform” is tested. It is assumed that the underlying distribution is continuous. The program computes cumulative proportions from the sample and finds the absolute value of their maximum difference from the cumulative uniform distribution (i.e. the Kolmogorov-Smirnov statistic).

where cpoi and cpei are the ith observed and uniform cumulative proportions respectively.

The output includes the test statistic and its two-tailed probability (which is computed from the Smirnov formula).

Since the probability is larger than 5%, do not reject the null hypothesis.

The null hypothesis is rejected at the 99% confidence level. UNISTAT reports the exact probability while Sprent compares the test statistic with the published critical value for 1%.

Cumulative distributions computed from the two given data sets are compared. The test statistic is:

and cp1i and cp2i are the ith cumulative proportions of the first and second samples respectively.

Data in one of the three types supported for two sample tests can be entered (see 6.0.2. Two Sample Tests). The output includes the number of cases in two samples, the maximum difference, the test statistic, its two-tailed probability from the Smirnov distribution.

If the last data option is selected, the program will prompt for the number of cases in each sample and the maximum absolute cumulative difference. It is possible to use this procedure to calculate the cumulative Smirnov distribution probabilities without having to perform the test itself.

For Distance and Age