It is possible to calculate cumulative probabilities for given critical values and, conversely, critical values for given cumulative probabilities. This can be done either as a quick calculator-type single-entry calculations, or multiple data points can be input together with their parameter values as spreadsheet columns. Further options enable the user to produce Random Numbers with given distribution parameters and estimate and fit theoretical distributions on data. The following Distribution Functions are supported. 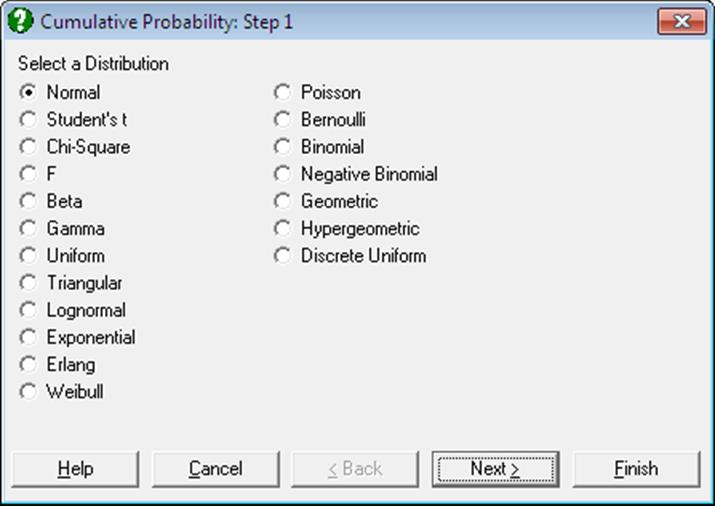 Any one of these 19 Distribution Functions can be selected from a dialogue. There are a few options which are not implemented. These are Random Numbers and Expected Frequencies for hypergeometric distribution, and Random Numbers for negative binomial and Weibull distributions.

The routines used for Distribution Functions are highly accurate and in general all displayed digits are significant. If in some cases there appears to be a discrepancy between the values calculated by UNISTAT and the published statistical tables, the most likely reason is the rounding off errors involved in published tables due to the limited number of digits they display.

A significant portion of potential errors are trapped during the input of parameters. The user is prevented from entering illegal values for most parameters. For instance, the program will not proceed unless a number between 0 and 1 is entered for a probability value, a positive integer for a degree of freedom, a lower limit which is less than the upper limit. However, it is not possible to trap all errors at the entry stage. In such cases the value -99 will be returned for a parameter which cannot be calculated.

Density functions and mean and standard deviation formulas of all 19 distributions are given in the Appendix.