Discriminant Analysis is used to determine whether a given classification of cases into a number of groups is an appropriate one. The Discriminant Analysis can be used, for instance, to test whether a particular clustering of cases obtained from a Cluster Analysis is likely. It will report whether the group assignment of a case is true or false, as well as reporting the probability of the case belonging to a particular group. 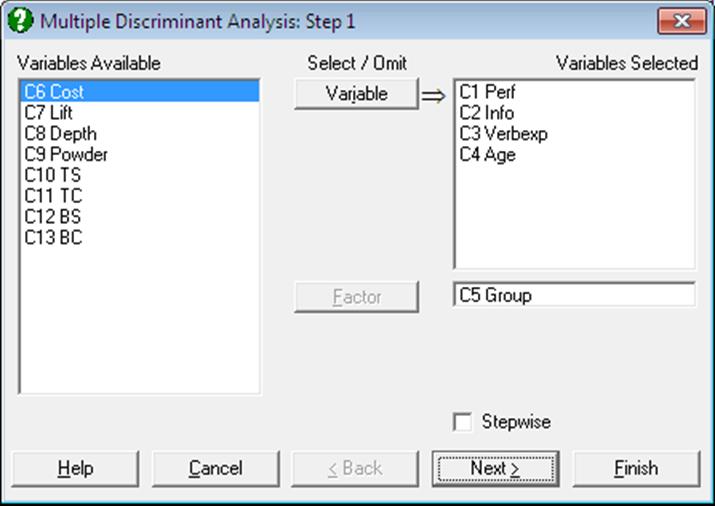 Two types of Discriminant Analysis are provided: Multiple (including Linear and Canonical Discriminant Functions, which can be stepwise) and nonparametric Kth neighbour (also known as K-NN) discriminant analyses.

Predictions: The estimated discriminant functions can be applied to test cases to predict their group membership. If, for a case (row), all independent variables are non-missing, but only the factor (group) variable is missing, then it is treated as a test case. Such cases are not included in the estimation of discriminant functions, but the estimated coefficients are applied to them. The predicted cases are represented in all plots (by an @ character) and in all relevant tables (by an * character).

It is possible to use markers other than missing data to designate cases as test cases. Suppose, for instance, you wish the program to interpret cases with -1 in their group variable as test cases. To do this, enter the following line in the [Options] section of Documents\Unistat10\Unistat10.ini file:

If the group variable is a string variable, you can use a string value as a test case marker.