Multi-way cross-tabulations with or without weights can be performed. 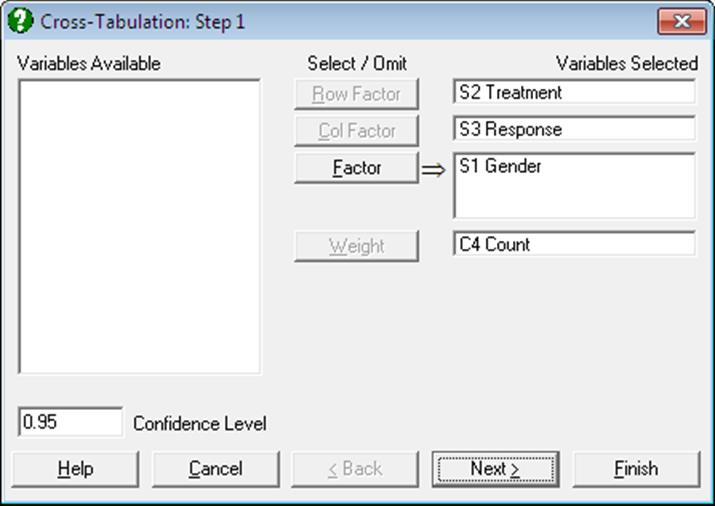 At least one factor column should be assigned as the [Row Factor] and another as the [Column Factor], whose categories are to be displayed on the rows and columns of the generated table respectively. Optionally, an unlimited number of further factor columns can be selected to run multi-way analyses. In this case, a further set of output options for Stratified Analysis will become available. 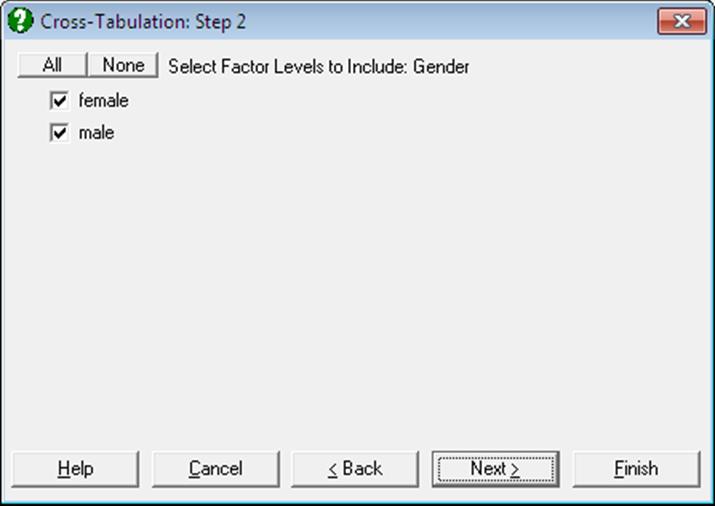 The program will sort each column separately, determine the number of categories in each and then count the frequency of occurrence of every combination of categories. For instance, in a two-way analysis, if the variable [Row Factor] takes on values 0, 1, and 2 and the variable [Column Factor] takes on four different values such as 3, 4, 5 and 6, the program will produce a 3 by 4 table (number of rows by number of columns). When further [Factor] variables are included in the analysis, a separate table and its associated statistics will be generated for each combination of factor levels selected. 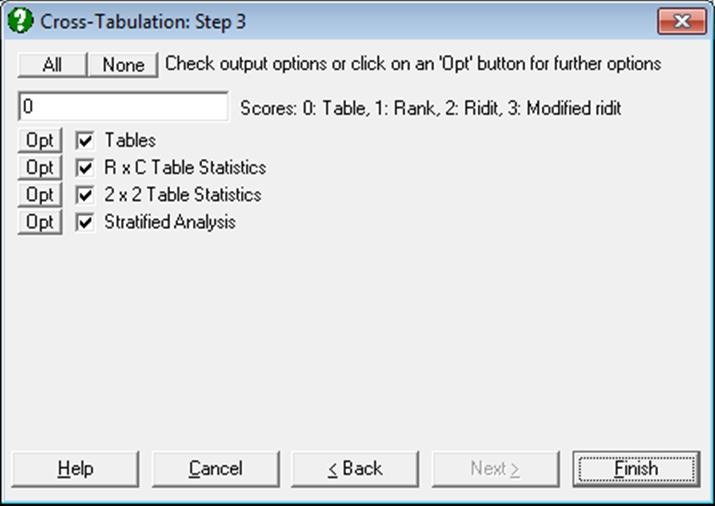 Some of the statistics computed for this procedure depend on the ordering of rows and columns of the contingency table. These statistics are Linear-by-linear (also known as Mantel-Haenszel chi-square test), Pearson correlation, Eta and Cochran-Armitage trend test. First define the notation used in this section:

n – sum total of all frequencies

ri – sum of frequencies in the ith row

cj – sum of frequencies in the jth column

One of the following four methods can be used:

Table scores: This is the default score method. The column and row index numbers are used as factor levels.

Rank scores: These are the rank values as used in Spearman rank correlation coefficient and they are computed as:

Ridit scores: These are the rank scores divided by the total sample size:

Modified ridit scores: These are the rank scores divided by the total sample size + 1: 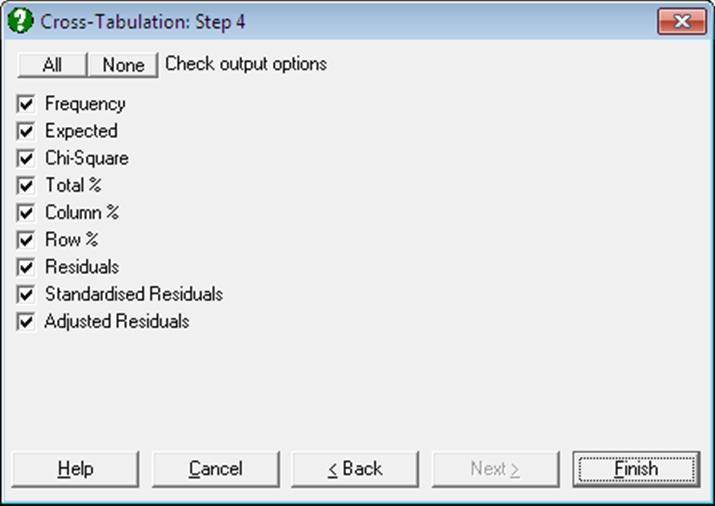 Each output option is displayed as a separate table, which can be sent to Data Processor for further analysis.

Frequency: For Contingency Table, this is the data as it exists in the spreadsheet. It may contain non-integer and / or missing data. For Cross-Tabulation, it consists of the computed frequency figures for categories represented by the row and column factors. Therefore, it always contains integers and no missing data. Define:

This table also displays the row sum and column sum values on the table margins.

Expected Frequency: For each cell, the expected frequency is calculated as:

Chi-square: The contribution of each cell to the overall chi-square value is calculated as:

Total Percent: Percentage of the cell frequency out of sum total of all table frequencies:

Row Percent: Percentage of the cell frequency out of sum of frequencies in the same row.

Column Percent: Percentage of the cell frequency out of sum of frequencies in the same column. 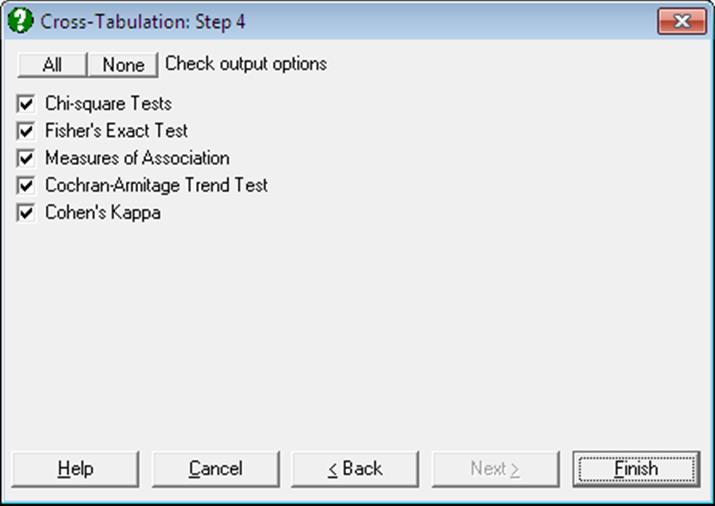 Several chi-square significance tests and chi-square related coefficients are reported. The program also reports the number of cells with an expected frequency less than 5, its percentage out of total frequency and the minimum expected frequency. The aim of this information is to enable the user to judge whether the asymptotic probabilities reported here are reliable enough, or the exact probabilities like Fisher’s should be used.

Pearson Chi-square: This provides a measure of association between row and column factors.

For rows and columns containing 0s only, the degrees of freedom is adjusted accordingly.

Likelihood Ratio: This involves the ratio of observed and expected frequencies.

Yates Correction: Also known as continuity correction, this is reported for 2 x 2 tables only.

Linear-by-linear: This is also known as Mantel-Haenszel chi-square test. It tests the linear association between row and column factors:

where R-squared is the Pearson correlation between the row factor and the column factor. The value of this test depends on the score method selected (see Scores).

McNemar-Bowker: This is a test of symmetry for square tables. Since it is identical to McNemar Test for 2 x 2 tables, it is reported only for 3 x 3 or larger square tables.

Phi Coefficient: For tables other than 2 x 2:

with a magnitude equal to Pearson correlation coefficient R (see Linear-by-linear Test above). Note that phi coefficient for 2 x 2 tables can be negative.

Cramer’s V Coefficient: For tables other than 2 x 2:

Therefore, Cramer’s V coefficient for 2 x 2 tables can be negative.

Fisher’s Exact Test for R x C Tables is also known as the Freeman-Halton test. The network algorithm developed by Mehta and Patel (1983) is used to calculate the two-tailed and table probabilities. This procedure is computationally demanding and it may not be feasible for large tables. For 2 x 2 tables the results are identical to that of Fisher’s Exact Test which is available under the Paired Proportions procedure (see 6.6.2.3. 2 x 2 Table Statistics below. The latter procedure also reports the left- and right- tail probabilities in addition to two-tailed and table probabilities.

Tests in this section are used to assess the association between row and column factors of the table. All test statistics (with the exception of eta) are reported with their standard errors and asymptotic confidence intervals using the standard normal distribution:

The first group of tests (Somer’s delta, Goodman-Kruskal’s gamma, Kendall’s tau b and tau c) will rank observations as concordant or discordant. Each observation is checked pairwise with all other observations to see whether its relative ordering is the same in the sequence. The ordering is called concordant if it is the same and discordant if it is different. These tests are computationally demanding. If the table is large, they may take a long time to compute.

The following entities are computed:

Goodman-Kruskall’s Gamma: This coefficient does not make an adjustment for ties. It is defined as:

The value of gamma can be taken as the probability of correctly guessing the order of a pair of cases on one variable once the ordering on the other variable is known.

Kendall’s tau b: This statistic reflects the effect of ties both in columns and rows:

where T is sum total of all ranks and m is the minimum of number of columns or number of rows.

Pearson Correlation: The value of this test depends on the score method selected (see Scores).

Spearman Rank Correlation: The only difference from Pearson correlation is that ranks of factor levels (rank scores) are always used.

Eta: The value of this statistic depends on the score method selected (see Scores). The asymmetric eta for the column factor is defined as:

where Yj are the levels of column factor and:

Eta for the row factor can be obtained by reversing the indices.

and the symmetric delta is:

Uncertainty Coefficient: This measures the proportion of uncertainty (entropy) in the column variable Y that is explained by the row variable X:

and the symmetric uncertainty coefficient is:

This test is available only for 2 x c or r x 2 tables. It provides a test statistic for the trend of binary proportions in levels of a factor with two or more levels (the response variable). The latter is assumed to contain binary responses (e.g. yes / no) and its levels are internally recoded as 0 and 1. For a table with two columns and r rows, the trend is defined as:

is the ith level of the row variable and

Kappa is computed for square tables. Only an unweighted Kappa test is performed. For details see 6.5.10. Kappa Test for Inter-Observer Variation. 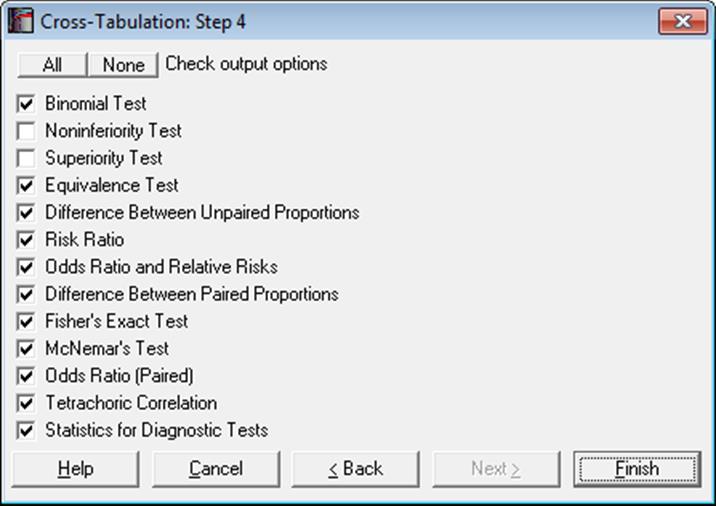 ·      Binomial Test: This test is performed on the row factor and the column factor separately, i.e. on the row sums and the column sums of the table. Therefore, one needs to take this into consideration when the Contingency Table option is selected. By default, the program uses an expected proportion of 0.5. You can change this to any value between 0 and 1 from Binomial Proportion → Binomial Test procedure.

This facility is especially useful when the four frequency values for a 2 x 2 table are already available in the spreadsheet. In this case they will not have to be typed again into the Cell Frequencies are Given dialogue of the nonparametric tests. 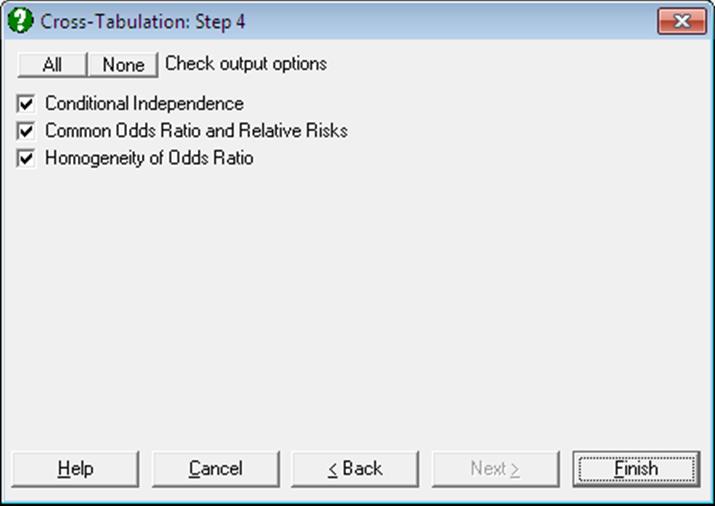 The tests in this group are available only for multi-way 2 x 2 cross-tabulations, i.e. when one or more factor variables are selected apart from the row and column factors, which have only two levels each. When a factor variable is selected, all tables and tests described above will be displayed once for each level (stratum) of the factor variable. The tests described in this section are reported only once at the end of the output.

These two chi-square statistics will test the independence of the row and column factors across strata.

and nk is the total frequency of the kth stratum.

Mantel-Haenszel: This is similar to Cochran test but introduces a continuity correction:

The common odds ratio for multi-way 2 x 2 tables is estimated by Mantel-Haenszel and logit methods. The odds ratio for the kth stratum is defined as:

Mantel-Haenszel estimate: For multi-way tables the common odds ratio is defined as:

The null hypothesis “odds ratios across strata are equal” is tested.

Breslow-Day: This test is based on Mantel-Haenszel estimate of the common odds ratio:

Tarone: This is a modification of Breslow-Day test:

Output for the second stratum Gender = female is removed to save space.

Binary variable is recoded to 0s and 1s.