The ordinary least squares regression assumes normal distribution of residuals. When this is not the case, the Box-Cox Regression procedure may be useful (see Box, G. E. P. and Cox, D. R. 1964). It will transform the dependent variable using the Box-Cox Transformation function and employ maximum likelihood estimation to determine the optimal level of the power parameter lambda. In order to run a Box-Cox Regression, the dependent variable should not contain any non positive values.

Variable selection and Ordinary Least Squares Output dialogues for this procedure are identical to that of Linear Regression. There is a separate output dialogue for maximum likelihood estimation, which contains diagnostic and graphic options for the estimation parameters and normal probability plots of data before and after the transformation. It is possible to run a Box-Cox Regression without any independent variables. In this case the results will be similar to that of Data Transformation procedure with Box-Cox option (available under Statistics 2 → Quality Control menu).

Box-Cox Regression will transform the dependent variable as follows:

and determine the optimal value of lambda by maximising the following log-likelihood function:

is the estimate of the least squares variance using the transformed y variable.

A golden section minimisation algorithm is employed to minimise the negative of the log likelihood function within the range of -3 ≤ λ ≤ 3. These limits can be changed by the user if necessary and the changes will be stored by the program. 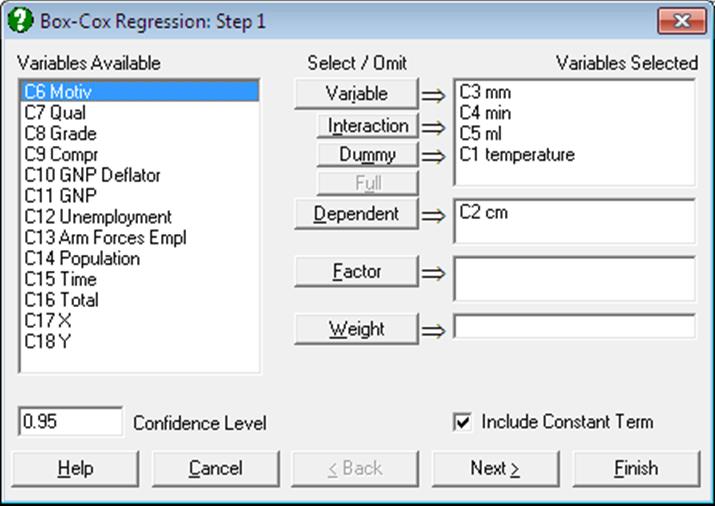 As in Linear Regression, Box-Cox Regression can be used to estimate models with or without a constant term, with or without weights and regressions can be run on a subset of cases as determined by the levels of an unlimited number of factor columns. An unlimited number of dependent variables can be selected in order to run the same model on different dependent variables. It is also possible to include interaction terms, dummy and lag/lead variables in the model, without having to create them as spreadsheet columns first (see 2.1.4. Creating Interaction, Dummy and Lag/Lead Variables).

You can transform a single variable without using any predictor (independent) variables. In this case the results will be similar to that of the Data Transformation procedure with Box-Cox option (available under Statistics 2 → Quality Control menu). A column containing numeric data can be selected as a weights column. 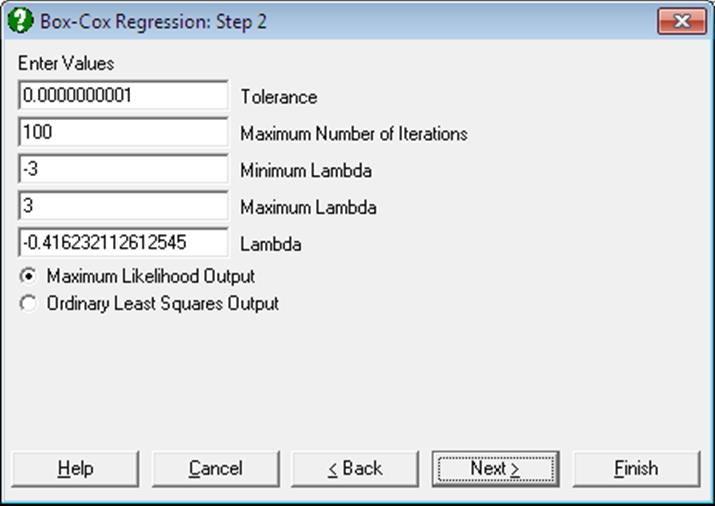 Tolerance: This value is used to control the sensitivity of minimisation procedure employed. Under normal circumstances, you do not need to edit this value. If convergence cannot be achieved, then larger values of this parameter can be tried by removing one or more zeros.

Minimum Lambda: Limits for the range where the optimum lambda will be searched can be set. Change this value if the optimal lambda cannot be found within the specified range. If the lambda displayed is the same or very near to this minimum, change it to a smaller value. When the limit is changed, a re-calculation is forced and lambda is estimated again.

Maximum Lambda: Change this value if the optimal lambda cannot be found within the specified range. If the lambda displayed is the same or very near to this maximum, change it to a higher value. When the limit is changed, a re-calculation is forced and lambda is estimated again. 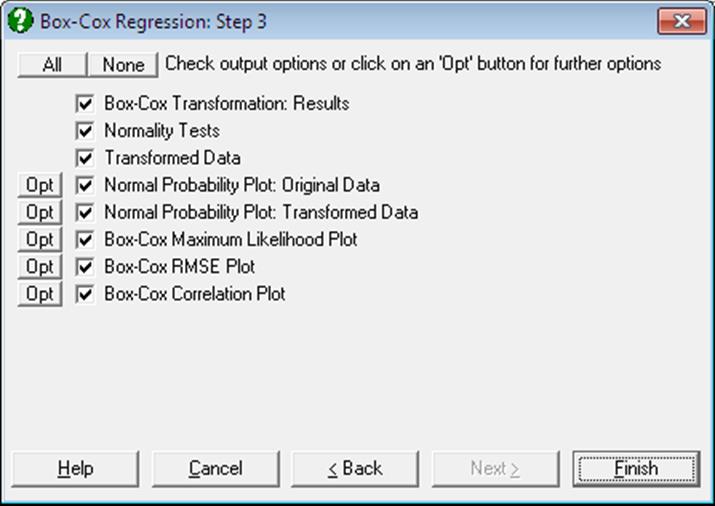 Lambda with Confidence Limits: The confidence interval for optimum lambda is based on the likelihood ratio statistic and it is defined as:

Values corresponding to lower and upper bound of lambda are computed separately using an iterational procedure.

Transformation Formula: The equation applied in transforming the dependent variable is displayed. The same equation is also printed on a separate line with estimated parameter values, in a format suitable for cell calculations in Excel. You can simply copy this equation, replace the variable x with a cell reference and run interpolations.

Likelihood Ratio Test: In Box-Cox Regression, this test performed by evaluating the regression equation for lambda fixed at λ1 = -1, 0 and 1.

which is chi-square distributed with one degree of freedom.

Normality Tests: Anderson-Darling Test of normality is performed on the original and transformed dependent variable thus allowing you to judge whether the transformation was useful. No or a small increase in the tail probability indicates that Box-Cox Transformation was not useful.

Transformed Data: The original and transformed dependent variable values and their group membership (if any) are sorted and displayed in a table. If you wish to display the unsorted values, you can use the Case (Diagnostic) Statistics output in Ordinary Least Squares Output option.

If you are using UNISTAT in Stand-Alone Mode, click on the UNISTAT icon on the Output Medium Toolbar to send all output to UNISTAT spreadsheet. In Excel Add-In Mode select the output matrix as data for further calculations.

Box-Cox Correlation Plot: Values of the regression correlation coefficient are plotted against lambda. 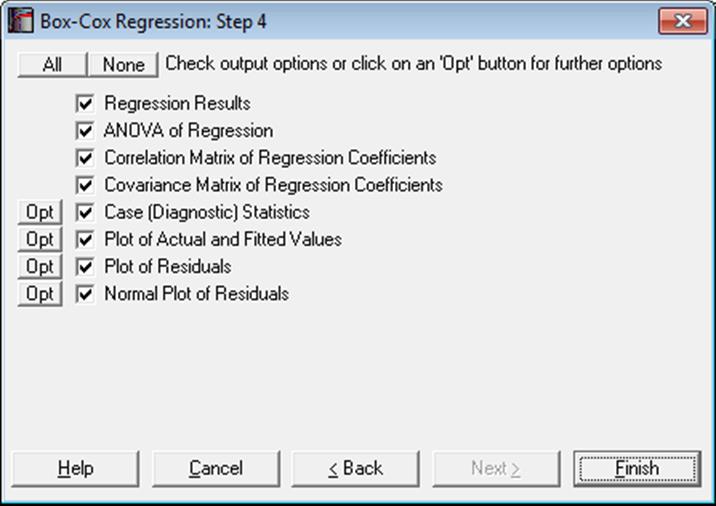 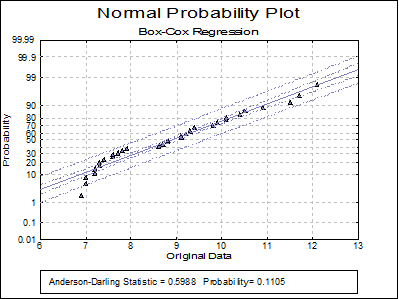 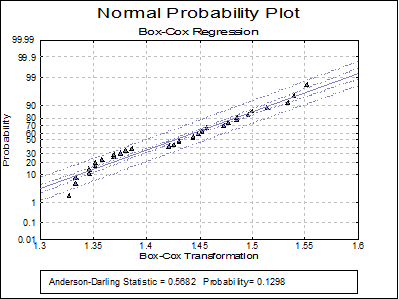 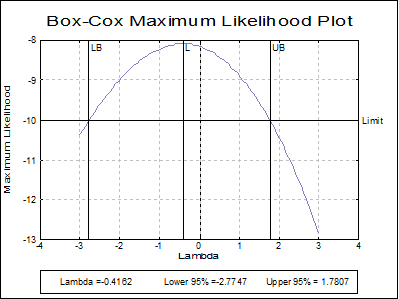 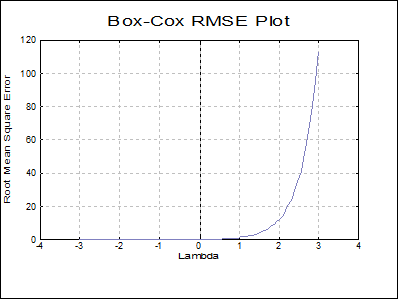 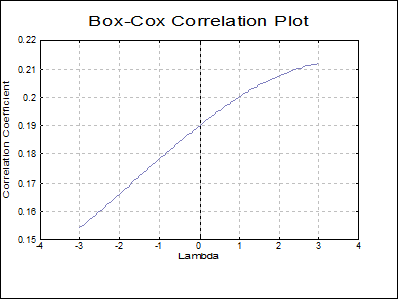